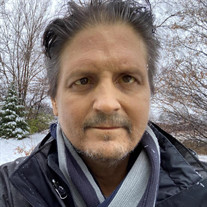 Michael Dean Roberts, 51 years, a lifelong resident of Monroe, Michigan, passed away shortly after receiving the Sacrament of Last Rite, on Wednesday, November 25, 2020 at Promedica Toledo Hospital in Toledo, Ohio. On February 6, 1969, a boy was born made to the image and likeness of God. Loved by his parents Laford and Catherine (Zdeb) Roberts. This was a day of joy and continuous joy throughout his life. Why? Because he was a person characterized by kindness, courage, sympathy, and love. Michael was both baptized and confirmed at St. John The Baptist Catholic Church of which he was a lifelong member. The strong influence of his education began at with his entry into St. John the Baptist Catholic Elementary School where he spent kindergarten through eighth grade and then continued through high school at Monroe Catholic Central graduating in 1987. While at Catholic Central he played tennis and golf. He aspired to be an actor, he began his education at the University of Toledo and then moved to New York City and graduated for the American Music and Dance Academy in 1992. Trying to survive in New York led him to a new vocation as a chef from 1992 – 1995. Returning to Monroe, he continued as a chef at the Monroe Golf & Country Club as well as other various restaurants and catering services. Mike had a great sense of humor and such a deep appreciation of his family and friends. He thanked God for allowing him to be born in the United States of America. This was reiterated after touring Eastern Europe a few years back. He was an avid Michigan State Spartan, Detroit Red Wings, and Detroit Tigers fan. He loved music and attended many concerts of his favorite groups. Mike enjoyed, cooking, herb gardening, and playing golf. Mike is survived by his mother, Cathy Roberts of Monroe, aunts and uncles, Stan (Mary) Zdeb of Scottsdale, AZ, Coralee Zdeb of Sherman, TX, David (Barb) Roberts, Howard (Charlotte) Roberts both of Monroe and Caroline Sue (Dennis) Conden of Fort Worth, TX. He is also survived by very special persons, his Godparents, Raymond and Donna Dushane, and many cousins. Sadly, Michael was preceded in death by his father, Laford, both sets of grandparents and an uncle, Andy Zdeb of Sherman, TX. Visitation will be held on Tuesday from 3-7 pm at the Bacarella Funeral Home, 1201 S. Telegraph Rd., Monroe, Michigan, 48161. Mass of the Resurrection, celebrating Michael’s life, will begin at 11:00 am on Wednesday, December 2, 2020 at St. John The Baptist Catholic Church. Interment will follow at St. Joseph Cemetery in Monroe. Due to the COVID-19 pandemic, visitation at the funeral home will be limited to twenty-five persons at a time and those attending are asked to wear face coverings and maintain social distancing guidelines. At church he will not lie in state, as per usual. Because of his love of God, Mike expressed his wishes that, in lieu of flowers, any donations would go to SMCC or MCES. Michael’s mother Cathy would like to thank Promedica of Monroe and Toledo along with Henry Ford Hospital in Detroit for their kindness, care and compassion.

The family of Michael Dean Roberts created this Life Tributes page to make it easy to share your memories.

Send flowers to the Roberts family.