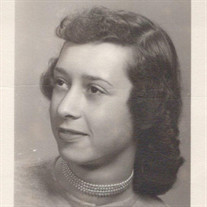 Yvonne M. (Chatner) Haman, age 83 of Monroe, passed away at 6:43 p.m. Friday, April 10, 2020 at Toledo Hospital due to vascular complications she had been experiencing the past two months. Born in Monroe, Yvonne was the daughter of the late Arling and Helen (Pratt) Chatner. She was in the first 8th grade graduating class of Custer Elementary School and graduated from Monroe High School in 1953. Yvonne married Milton “Willie” Hoffer in 1954. Three daughters were born of this union. He passed away in 1977. On February 24, 1985, she and Ronald Dale Haman were married in Grace Lutheran Church by then pastor, Rev. Paul O. Richert. Yvonne was employed by River Raisin Paper Company (Union Camp), Lincoln School, Monroe Junior High School, and Raisin Valley Title Insurance Company for a duration of three years each. Lastly, she was employed by the Michigan Department of Corrections for 17 years before retiring in March of 1997. Yvonne was a member of the Monroe Senior Citizens Center, the Senior Citizens Bowling League at Nortel Lanes, and Grace Lutheran Church where she sang in the choir. She was a former hospice volunteer and active member of the Monroe YMCA. Yvonne is survived by her husband, Dale Haman; three daughters: Vicky (Jeff) Mayer of Temperance, Lorri Wehner of Monroe, and Dawn (Spencer) Seitz of Exeter, Rhode Island; four step-children: Margie (Tim) Glozik of Monroe, Ron (Karine) Haman of Adrian, Jeff (Kim) Haman of Warren, and Randy (Vicky) Haman of Chapel Hill, Tennessee; seven grandchildren, eleven step-grandchildren and several great-grandchildren. In addition to her parents and previous husband Willie, Yvonne was also preceded in death by two step-granddaughters, Onnalee Garcia and Nicole Haman; and son-in-law, Dennis Wehner. Due to current social gathering limitations, a memorial service will be scheduled at a later date. Inurnment with burial at Roselawn Memorial Park will occur at that time. Bacarella Funeral Home is assisting the family with funeral and cremation arrangements. For anyone wanting to make a donation in memory of Yvonne, the family suggests Grace Lutheran Church (630 N. Monroe St., Monroe, MI 48162).

Yvonne M. (Chatner) Haman, age 83 of Monroe, passed away at 6:43 p.m. Friday, April 10, 2020 at Toledo Hospital due to vascular complications she had been experiencing the past two months. Born in Monroe, Yvonne was the daughter of the late... View Obituary & Service Information

The family of Yvonne M. Haman created this Life Tributes page to make it easy to share your memories.

Send flowers to the Haman family.