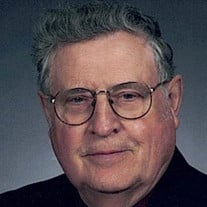 William (Bill) Sype, 85, of Monroe, was called home to God on Tuesday, September 24, from St. Joseph Hospital in Ann Arbor, following a lengthy illness. He was born on October 19, 1933, in Frenchtown Township, Michigan to George and Loretta (Berns) Sype. He was baptized and confirmed at Trinity Lutheran Church in Monroe, where he married Bonnie F. (Lamb) Sype on January 16, 1954. Bill served his country from 1951-1961 in the Michigan National Guard, attaining the rank of Master Sergeant. He deeply loved his church, enjoyed Bible studies and served his Lord and Savior, Jesus Christ, as an active member of Holy Ghost Lutheran Church. He held positions on many boards including Executive Director, as well as ushered for many decades. Bill proudly served numerous years as Cubmaster (Pack 27 Cubscouts) and Assistant Scoutmaster (Troop 27 BSA), where he was given the nickname, “Bull Moose”. He was employed by the former Ohio China Company for 34 years, followed by employment at Wickes Lumber, and finally, at the former Fritz China & Gifts until his retirement in 2000. He was an avid bird hunter and pursued ducks and pheasant until the lack of game and hunting area caused him to try Grouse and Woodcock hunting, which he pursued until the end, typically with a bird dog by his side. He enjoyed most types of woodworking and crafts, cutting firewood, reading every Western he could get his hands on, and spending countless hours working crossword puzzles. In addition to his parents, Bill was preceded in death by 3 brothers, 5 sisters and 1 step grandchild. He is survived by his wife of over 65 years, Bonnie “Pat”; his children, George (Gail) Sype of Rossford, OH, Gregory (Debra) Sype and Lori (Charles “Gus”) Joblinski of Carleton, Matthew (Donna) Sype of New Boston, and Janice Sype of Monroe; his grandchildren, Michael (Lori) Sype, Karen (Jack) Taeff, Jeremy Sype, Jessica (Derek) Van Stone, and Julia Joblinski; and 7 great-grandchildren. Also surviving is one sister, Maxine Evans. A memorial service will be held at Holy Ghost Lutheran Church, 3589 Heiss Road, Monroe on Saturday, October 19, 2019. Visitation with the family will start at 10 a.m. with services celebrating Bill’s life beginning at 11 a.m. Rev. Lee Cullen, Pastor, will officiate. Bill’s cremated remains will be privately interred at Gethsemane Cemetery at a later date. In lieu of flowers, a memorial contribution to Holy Ghost Lutheran Church and School is suggested. Online condolences and special memories may be shared with the family by visiting the obituary page at www.bacarellafuneralhome.com.

William (Bill) Sype, 85, of Monroe, was called home to God on Tuesday, September 24, from St. Joseph Hospital in Ann Arbor, following a lengthy illness. He was born on October 19, 1933, in Frenchtown Township, Michigan to George and Loretta... View Obituary & Service Information

The family of William T. "Bill" Sype created this Life Tributes page to make it easy to share your memories.

Send flowers to the Sype family.