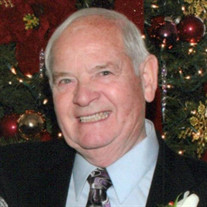 William B. Shipman, age 89 of Monroe, left his Earthly body to join his Savior at his permanent home Monday, March 30, 2020 at the I.H.M. Senior Living Community. Born October 19, 1930 in Macy, Indiana, Bill was the son of the late Rev. Clarence and Jessie (Burkett) Shipman. After attending Adrian High School, he married Virginia G. Wade on August 19, 1950 in Hudson, Michigan. Bill answered the call of his country by enlisting in the U.S. Army during the Korean Conflict. He served from February 1, 1952 until being honorably discharged on January 15, 1954, obtaining the rank of Corporal. Bill was employed by Sterns Manufacturing in Flat Rock, Michigan from 1950–1972. He then went to work for Ford Motor Company in Maumee, Ohio from 1972 until retiring in 1994. Bill possessed a great sense of humor and was known for being a bit of a prankster and playing practical jokes. He enjoyed camping during the summer in Howell, Michigan with his family and wintering in Haines City, Florida with his wife Virginia. A member of UAW Local 1892 in Toledo and the Monroe Church of the Nazarene, he also attended the Winter Haven Church of the Nazarene in Florida. Bill is survived by his wife of almost 70 years, Virginia; three sons: Robert (Linda) Shipman of LaSalle, Kevin (Margaret) Shipman of Monroe, and Kirk (Tammy) Shipman of Monroe; a sister, Frances (Leroy) Preston of Indiana; seven grandchildren: Amy (Jeff) Harbaugh, Aron (Liz) Shipman, Gregory (Katie) Shipman, Brett (Valeri) Shipman, Bryan (Savannah) Shipman, Eric (Deadri) Shipman, and Ashley Shipman; and 12 great-grandchildren. In addition to his parents, Bill was also preceded in death by six brothers, Raymond, David, Clarence Jr., Gerald, Roscoe, and John Shipman. Due to current social gathering limitations, visitation and funeral services will be privately attended by family at Bacarella Funeral Home. Burial will be at Roselawn Memorial Park Cemetery in LaSalle under the auspices of VFW Post 1138 Monroe. A memorial celebration of his life will be scheduled at a later date. In lieu of flowers, the family suggests memorial donations be made to Monroe County Opportunity Program (MCOP) Senior Department.

William B. Shipman, age 89 of Monroe, left his Earthly body to join his Savior at his permanent home Monday, March 30, 2020 at the I.H.M. Senior Living Community. Born October 19, 1930 in Macy, Indiana, Bill was the son of the late Rev.... View Obituary & Service Information

The family of William B. Shipman created this Life Tributes page to make it easy to share your memories.

William B. Shipman, age 89 of Monroe, left his Earthly body to...

Send flowers to the Shipman family.