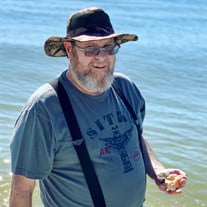 William Mikail “Mike” Perry, 63 of Monroe, took the hand of God, the only one strong enough to convince Mike to leave his family, on Wednesday, February 12, 2019. He left this life as he lived it, surrounded by people he loved, with gardens and trees outside his window, and deer peeking in. Born July 26, 1955 in Harlan County, Kentucky, Mike came to Monroe, with his family when he was eight years old, becoming a boy scout, working toward Eagle Scout, and graduating from Monroe High School in 1973. On August 1, 1975 he married Peggy Lee Miller at Trinity Lutheran Church, Monroe. That was also the day he was baptized there. Mike proudly enlisted in the United States Air Force in 1974, honorably serving his country as an Air Transportation Supervisor with the rank of Staff Sergeant, ending his service in 1985 and moving back to Monroe with his wife and daughters. Mike finished his career in Shipping and Receiving at National Galvanizing, where he was employed for almost 30 years and only a diagnoses of liver cancer in April, 2018 slowed him down enough to let others take over. Mike was a family man who viewed the best vacation as a way to be with those he loved, not as a destination. He was a quiet man who spent time walking barefoot through his garden, soaking in the beauty God granted him. He went to Hillsdale each year with his brother, most often using his camera to shoot the one that got away. He loved old cars and his soul sang with music. Mike's love, kindness, and memories live on with his loving wife of forty-three years, Peggy Perry of Monroe; daughters TaraGay (Michael) Walsh of Holland, Ohio and Cassandra (Rob D’Arpini) Perry of Monroe; mother, Joyce L. (Casteel) Perry; brothers, R. David (Beth) Perry of Monroe and Timothy (Lisa) Perry of St. Charles, Missouri; three grandchildren: Cadence, Rylee, and Amelia Walsh; goddaughter Molly Kellie; and loved pet Stitch. So many nieces and nephews fell in love with Uncle Mike and he with them; Ashley, Taylor, Alexis, and Caitlin, are a few of the most recent, but there are a dozen more. Mike married Peggy and in the process her family became his with no distinction in the way he loved them or the way he was loved by them. Mike was preceded in death by his father, William E. Perry, and his father-in-law, Clarence Miller Jr. Memorial contributions in Mike’s memory are suggested to Air Force Aid Society. Visitation will be held on Sunday, February 17, 2019, from 1 p.m. until 8 p.m. at Bacarella Funeral Home, 1201 South Telegraph Road, Monroe, MI, 48161. Services celebrating his life begin at 1 p.m. Monday, February 18, 2019 also at Bacarella Funeral Home. Rev. Jeffrey Heimsoth, Pastor of Trinity Lutheran Church, will officiate. In accordance with Mike’s wishes, cremation will follow. Online condolences, and special memories, may be shared with the family by visiting the obituary page at www.bacarellafuneralhome.com.

William Mikail &#8220;Mike&#8221; Perry, 63 of Monroe, took the hand of God, the only one strong enough to convince Mike to leave his family, on Wednesday, February 12, 2019. He left this life as he lived it, surrounded by people he loved,... View Obituary & Service Information

The family of William Mikail "Mike" Perry created this Life Tributes page to make it easy to share your memories.

Send flowers to the Perry family.