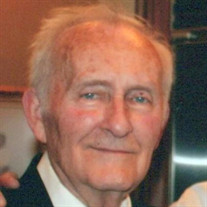 William P. Nichols, 89 years, of Monroe, Michigan, went home to be with the Lord on Sunday, December 6, 2020 at Wellspring Lutheran Home. Born June 17, 1931 in Kevil, Kentucky, Bill was the son of the late Rudolph and Verna (Wray) Nichols. The family moved to the Detroit area in 1932 where he worked at the family-owned dry cleaning business growing up. Bill graduated from both the Detroit High School of Commerce and Cass Technical High School in 1948. After graduation, he worked for the Chrysler Corporation as a machine operator and metal finisher at the Dodge Brothers Main Plant in Hamtramck and the DeSoto Plant in Detroit. Bill joined the United States Naval Reserve in 1951 where he proudly served until his honorable discharge in 1955. During this time, he was deployed for active duty as a submarine sonar operator aboard the USS Odax (SS-484) while stationed at Key West, Florida and at the Guantanamo Bay Naval Base. He earned the US Navy Expert Rifleman Medal and was awarded the National Defense Service Medal. He went on to attend Albion College and then Wayne State University, College of Education, where he earned a Bachelor of Science degree in Education and his Secondary Teaching Certificate. He also attended the Detroit College of Law. On June 25, 1955, Bill married his beloved wife, the former Joanne L. Kinzel, at St. Anne Catholic Church in Dearborn, Michigan. The couple moved to Monroe in 1959. Sadly, Joanne preceded him in death on June 21, 2012, just four days before their 57th wedding anniversary. Bill began his working career as an educator and taught Civics and History classes at Wyandotte Roosevelt High School. He later was elected Justice of the Peace in Frenchtown Township and served from 1959 until 1963. During this time, Bill was nominated as the Democratic candidate for State Senator and also served as the Chairman of the Democratic Party where he met many state and national leaders including President John Kennedy. He also served as the Program Coordinator for Monroe County Economic Opportunity, Inc. During the early 1970’s, Bill and his wife started Nichols Antiques and Auction Service in Monroe. They conducted many auctions and estate sales over the years, oftentimes with the assistance of their dear friends Jim and Virginia Paz as accountants along with their sons and Michael Bitz as floormen. They operated this business for nearly 30 years until their retirement. Bill enjoyed volunteering his time whether it was appraising antiques at the Monroe County Fair Grounds or Monroe County Community College or conducting auctions for local civic, religious and charitable organizations. He was the first auctioneer for St. Mary School, St. Anthony School, the Monroe City Police Department and many other organizations. He also enjoyed studying history, especially the history of Monroe County, playing cribbage and playing the lottery. Most of all Bill enjoyed time spent with family. Bill is survived by two loving sons: Hon. William Paul (Melissa) Nichols of Temperance, Michigan, and Robert David Nichols of Monroe, seven cherished grandchildren: Bradley, Riley, Megan, Jeremy, David, Ashley (Ben), and Erin. In addition to his parents and wife, Bill was preceded in death by a grandson: Brandon Nichols and a brother: James Nichols. Memorial contributions are suggested to SMCC High School or Save Monroe Strays. Due to the COVID19 pandemic, visitation and funeral services will be private and he will be interred next to his wife at Roselawn Memorial Park. Bacarella Funeral Home, 1201 S. Telegraph Rd., Monroe, Michigan, 48161, is assisting Bill’s family with funeral arrangements. Online condolences and special memories may be shared with the family by visiting the obituary page at www.bacarellafuneralhome.com

William P. Nichols, 89 years, of Monroe, Michigan, went home to be with the Lord on Sunday, December 6, 2020 at Wellspring Lutheran Home. Born June 17, 1931 in Kevil, Kentucky, Bill was the son of the late Rudolph and Verna (Wray)... View Obituary & Service Information

The family of William P. Nichols created this Life Tributes page to make it easy to share your memories.

Send flowers to the Nichols family.