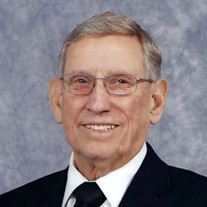 William G. Huntley (Bill), age 87, of Monroe, passed away Friday, August 27, 2021, in his home surrounded by his family. Bill was born January 20, 1934, in Union City, Pennsylvania. He was the son of Robert C. Huntley Sr. and Mildred Kaltenmark. He married Norma J. Thompson on July 24, 1954, in East Springfield, PA. He served his country in the U.S. Army from October 1, 1953, until his honorable discharge September 23, 1955. Bill was a graduate of Penn State University in 1957, and then was employed as a financial manager for Ford Motor Company for 34 years; retiring in May 1991. After his retirement he served on many community boards including Monroe Public Schools, Monroe County Intermediate School District, Monroe County Community College, and Habitat for Humanity. He was a member of St. Paul’s United Methodist Church and its Chancel Choir. He was also an avid sailor and member of Monroe Boat Club where he served as treasurer for many years. The Monroe Boat Club was his second home and he had many wonderful friends there that have been very supportive of our family during his last weeks. Bill is survived by his wife of 67 years, Norma J. Huntley; three children, Lori Ann (Joseph) Sottile of Chandler, AZ, Lisa Joy (Rick) Sheets of Lambertville, and Mark William (Diana) Huntley of Woodstock, IL; five siblings, Robert C. (Elfrieda) Huntley Jr. of Boise, ID, Russell (Ingrid) Huntley of Denver, CO, Lawrence (Amy) Huntley of Seattle, WA, Rev. Dr. Edward (Connie) Huntley of Erie, PA and Roberta (Tom) Roseski of West Springfield, PA; nine grandchildren and nine great grandchildren. He was preceded in death by his mother, Mildred, father, Robert Sr, step-mother, Adah Greenfield and daughter, Dr. Vicki Collins. Visitation will be held Tuesday, September 7, 2021 from 2:00 – 3:00 p.m. at St. Paul’s United Methodist Church, with service at 3:00 p.m. Facial covering is required for attendance. Bill’s brother, Rev. Dr. Edward Huntley, Pastor Willie Lass, and Rev. Melodye VanOudheusden, will officiate. Livestream viewing will be available via the church Facebook page. Click on Events and go to Celebration of Bill’s Life. Immediately following the service, cookies and refreshments will be served in the church atrium where the opportunity to share quirky stories and fond memories about Bill will be provided. Cremation will take place after the service with burial at a later date in accordance with Bill’s wishes. In lieu of flowers the family suggests memorial donations be made to St. Paul’s United Methodist Church. Online condolences and special memories may be shared with the family by visiting the obituary page at www.bacarellafuneralhome.com.

William G. Huntley (Bill), age 87, of Monroe, passed away Friday, August 27, 2021, in his home surrounded by his family. Bill was born January 20, 1934, in Union City, Pennsylvania. He was the son of Robert C. Huntley Sr. and Mildred Kaltenmark.... View Obituary & Service Information

The family of William G. Huntley created this Life Tributes page to make it easy to share your memories.

Send flowers to the Huntley family.