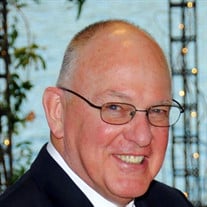 William MacChesney Churchill, Jr., age 78, of Monroe, passed away Friday, December 17, 2021 surrounded by his loving family at ProMedica Monroe Regional Hospital. Bill was born May 19, 1943 in Winona, Mississippi; he was the son of William MacChesney and Ruth A. (Miller) Churchill, Sr. He married Jeffery Lynn LeClercq September 30, 1966 sadly she preceded him in death October 1, 2002. He then married Robyn Seals (Harris) September 5, 2010. He served in the US Army during the Vietnam War earning a Bronze Star, Army Commendation Medal, National Defense Service Medal, Vietnam Campaign Medal, one Oversea Service Bar and a Vietnam Service Medal. He obtained his Bachelor of Science in Engineering Mechanics from University of Florida, where he was awarded a Certificate of Merit from the Benton Engineering Council and was a member of Pi Tau Sigma the National Honorary Mechanical Engineering Fraternity and a Bachelor of Art in History from Knox College. Bill retired from Tenneco as the Vice President of Global Engineering, he worked in Monroe, India, China and Belgium for the company before his retirement. Bill enjoyed life to the fullest spending time with his family (especially his grandchildren) and friends, extensive travels, classical music, motorcycles, sports cars, baseball tournaments, theatre, and researching on his computer. He is survived by his wife Robyn Churchill of Monroe, two children, William (Rachel) Churchill, III of Columbus, OH and Christine (Patrick) Burke of Woodridge, IL; two stepchildren, Stephen Seals of Monroe and Suzanne (Ben) Liedel of Monroe; one sister, Jacqueline (Robert) Cotsonas of Tallahassee, FL; eight grandchildren, Nicholas, Elizabeth, Alice, Harrison, Katherine, Emily, Carson and Brooklyn and one great grandson, Liam. In addition, to his first wife, Bill is preceded in death by his parents and an infant daughter, Heather. Memorial contributions are suggested to Wounded Warriors or a church or a charity of the donor’s choice. Visitation will be held Tuesday, December 28, 2021 from 12 noon to 4 p.m. at Bacarella Funeral Home 1201 S. Telegraph Rd. Monroe, MI 48161, where services will be begin 4 p.m. with Pastor Nate Click, pastor of Heritage Baptist Church, officiating and military honors provided by VFW Post 1138, Monroe. Online condolences and special memories may be shared with the family by visiting the obituary page at www.bacarellafuneralhome.com.

William MacChesney Churchill, Jr., age 78, of Monroe, passed away Friday, December 17, 2021 surrounded by his loving family at ProMedica Monroe Regional Hospital. Bill was born May 19, 1943 in Winona, Mississippi; he was the son of William... View Obituary & Service Information

The family of William M. Churchill Jr. created this Life Tributes page to make it easy to share your memories.

Send flowers to the Churchill family.