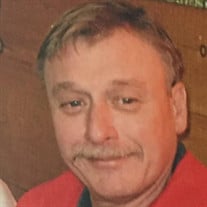 Willard T. “Woody” Pfluge, 64 years, a lifelong resident of Monroe, Michigan, went home to be with the Lord on Sunday, October 4, 2020 at ProMedica Monroe Regional Hospital. Born September 11, 1956 in Monroe, Woody was the son of the late George E. and Annabelle (Bogedine) Pfluge. He was a 1974 graduate of Jefferson High School. On July 4, 1975, Woody married his beloved wife, the former Cheri L. Carr, at Christ Lutheran Church in Monroe. Woody began his career as a mechanic in 1975 working for Harry May Chevrolet. In 1982 he went to Ed Harwood Buick Pontiac where he worked full time until 2005. He continued working part time at Ed Harwood’s until his retirement in 2010. Woody was a member of Christ Lutheran Church in Monroe. He enjoyed golfing, fishing, yardwork and traveling. His favorite travel destination was Myrtle Beach. Woody is survived by his beloved wife of 45 years; Cheri, his stepfather; Shelby Carter, a sister; Diane Oley of Monroe, a brother; George (Pat) Pfluge of Tennessee and several nieces and nephews. In addition to his parents, Woody was preceded in death by a sister Judy Hammac-Pfluge, a brother in law; Edward Joseph Oley and a half-brother Donald Nation. Visitation will be held on Thursday from 2-7 pm at Bacarella Funeral Home, 1201 S. Telegraph Rd., Monroe, Michigan, 48161, where funeral services celebrating Woody’s life will be held on Friday, October 9, 2020 at 11:00 am. Rev. David Hively, pastor of Christ Lutheran Church, will officiate. Entombment will follow at Roselawn Memorial Park. In lieu of flowers, memorial contributions are suggested to a charity of the donor’s choice.

The family of Willard T. "Woody" Pfluge created this Life Tributes page to make it easy to share your memories.

Send flowers to the Pfluge family.