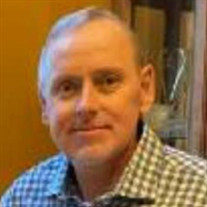 Wayne Lewis Coulter, age 54 of Monroe, passed away at 2:30 a.m. Thursday, December 24, 2020, in his home surrounded by his wife and children.   Born February 17, 1966, in Glendale, California, he is the son of Aaron and Linda (Manwaring) Coulter. Wayne attended Ida High School, graduating with the class of 1984. He married his beloved wife, Trina Gaglio, on September 27, 1991, at St. Joseph Catholic Church, Monroe. Wayne worked for Ford Motor Company for 32 years. He started his career at Mazda AutoAlliance, continued his career at the Rawsonville Plant, and would later retire at the Pilot Plant. He was a proud member of UAW Local 931.   Wayne was an industrious and devoted family man. He was a warmhearted husband to his wife of 29 years, and his greatest joy was being a proud father to three boys. He enjoyed taking his kids to numerous sporting events and supporting them in all their interests and dreams. Some of his proudest memories were those of restoring classic vehicles with his son’s. He was also well-known for his love of restoring classic cars. When Wayne’s was not working, he could always be found in his barn. All of his friends considered him “the best body and paint man on this side of heaven.” He enjoyed attending car events, most notably attending the NSRA car show in Louisville, KY with his friends Sam, Greg, and Frank.     To cherish his memory, Wayne is survived by his wife, Trina; three children: Sam, Jack, and Ben Coulter; parents, Aaron and Linda Coulter of Ida; and one brother, Scott (Ann) Coulter of LaSalle.   He was preceded in death by a sister, Teresa Fouts.   In lieu of flowers, memorial contributions in Wayne’s memory are suggested to St. Jude’s Children’s Research Hospital.   In accordance with his wishes, cremation has taken place and a memorial visitation will be held on Tuesday, December 29, 2020, from 3 p.m. until the memorial services celebrating his life begin at 6 p.m. at Bacarella Funeral Home, 1201 S. Telegraph Road, Monroe, MI 48161.  Deacon Mike Stewart will officiate. Due to the COVID-19 pandemic, visitation and services will be limited to twenty-five persons, and those attending are asked to wear face coverings and maintain social distancing.      Online condolences and special memories may be shared with the family by visiting the obituary page at www.bacarellafuneralhome.com

The family of Wayne L. Coulter created this Life Tributes page to make it easy to share your memories.

Send flowers to the Coulter family.