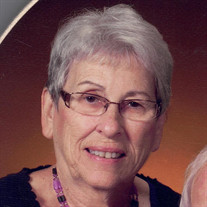 Virginia Glee Shipman, age 89, of Monroe, went home to be with the Lord on April 4, 2021, in her home, surrounded by her family. Born February 25, 1932 in Prattville, Michigan, she was the daughter of the late George W. and Edna “Peggy” A. (Munsell) Wade. Virginia attended Hudson High School, graduating with the class of 1949. She married her beloved husband, William B. Shipman, on August 19, 1950 in Hudson, Michigan. Sadly, he preceded her in death on March 30, 2020. Virginia worked for M & S Manufacturing as a Secretary for several years before she and her family moved to Monroe in 1965 and began her carrier with Monroe Public Schools. Virginia started a summer position at Lincoln Elementary School, later accepting the position of Secretary at Riverside Elementary School for over 25 years, retiring in 1996. After her retirement, Virginia and Bill purchased a home in Haines City, Florida, where the two enjoyed living for many years. She loved music, especially gospel, and was a skilled organist and pianist. Virginia enjoyed spending her summers camping with her extended family in Howell, Michigan. More than anything, she enjoyed spending time with family and friends and cherished all those who would “stop by” to visit with her. To cherish her memory, Virginia leaves three sons: Robert (Linda) Shipman of LaSalle, Kevin (Margaret) Shipman of Monroe, and Kirk (Tammy) Shipman of Monroe; seven grandchildren: Amy (Jeff) Harbaugh, Aron (Liz) Shipman, Gregory (Katie) Shipman, Brett (Valeri) Shipman, Bryan (Savannah) Shipman, Eric (Deadri) Shipman, and Ashley Shipman; and sixteen great-grandchildren. In addition to her parents and husband, she was preceded in death by one brother, Reginald Wade. Visitation will be held from 4 p.m. until 7 p.m. Thursday, April 8, 2021 at Bacarella Funeral Home, 1201 S. Telegraph Road, Monroe, MI 48161. She will lie in state 10 a.m. at Monroe Nazarene Church Friday, April 9, 2021, where services celebrating her life will begin at 11 a.m. Rev. David Shipman will officiate. Interment will follow at Roselawn Memorial Park Cemetery. Memorial contributions in Virginia’s memory are suggested to MCOP Senior Services, 1140 S. Telegraph Rd. Monroe, MI, 48161. Online condolences and special memories may be shared with the family by visiting the obituary page at www.bacarellafuneralhome.com.

The family of Virginia Glee Shipman created this Life Tributes page to make it easy to share your memories.

Virginia Glee Shipman, age 89, of Monroe, went home to be with...

Send flowers to the Shipman family.