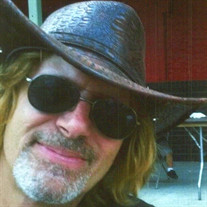 Timothy M. “Osh” Cousino, age 59 of Monroe, passed away Sunday morning, December 12, 2021 at ProMedica Monroe Regional Hospital. Tim’s passing was due to health complications related to Covid-19. Born April 28, 1962 in Monroe, Tim was the youngest son of Lavern and Theresa (Durbin) Cousino. Known as “Osh” to his family and friends, he graduated from Monroe High School in 1980 where he played in its Jazz Band. From then on, music was his life. Osh was a talented singer, songwriter, guitarist and teacher. He was instrumental in helping many guitarists develop their abilities. He composed music for the Independent film “ Ruhns of Dukhang”. He wrote heartfelt tunes like “Restless” and “Some Things Never Change”. He could be seen locally as a performer in many groups, here’s a short list of some: Triple Threat, TMark Blues, Paper Planes, Jeff Tuttle Band, Hunter Brooks Band, and Undyin’ Era. He was a featured performer with Shealee and Friends for a highly successful Monroe VFW fundraiser in support of our nations Veterans. He was a driving force in Monroe’s music scene. For the past seven years, Tim was employed as a Community Living Instructor for CHS Home Services in Monroe. He was an avid fan of Detroit Tigers Baseball and University of Michigan Football. Tim is survived by three sons: Timothy M. Cousino, II of Ypsilanti, MI, Benjamin R. Cousino of Monroe, and Jonathan M. Cousino of Toledo, OH; his mother, Theresa Durbin-Shaw of Monroe; three brothers: Michael (Brenda) Cousino of Frisco, TX, David (Anita) Cousino of Dayton, OH, and Craig (Roxanne) Cousino of Lake Wylie, SC; four grandchildren: Brynlee, Benjamin, Morgan, and Addison. Tim was preceded in death by his father. Family and friends may visit from 3 p.m. to 8 p.m. Wednesday, Dec. 15th at Bacarella Funeral Home where services will be held at 11 a.m. Thursday. Rev. Fr. David Burgard, pastor of St. Mary Catholic Church will officiate. Cremation will follow in accordance with Tim’s wishes. For anyone wanting to make a donation in memory of Tim, the family suggests supporting the Monroe VFW Post 1138 Ritual Team.

The family of Timothy M. "Osh" Cousino created this Life Tributes page to make it easy to share your memories.

Send flowers to the Cousino family.