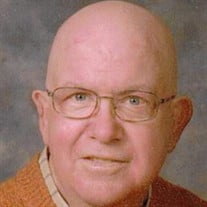 Thomas A. Stepp, age 76 of Monroe, went to be with his Lord at 2:01 p.m. Tuesday, June 25, 2019. His passing came during his stay at ProMedica Monroe Regional Hospital since becoming seriously ill a month ago. Born October 12, 1942 in Louisville, TN, Tom was the son of the late Robert and Elberta (Parrott) Stepp. He came to Monroe as a young boy and graduated from Monroe High School in 1961. Tom served in the U.S. Army from September 6, 1961 until being honorably discharged on December 21, 1964. On October 29, 1965, he married Pamela Ann Siebert at St. Michael Catholic Church. He was a member of the National Rifle Association and a former member of Moose Lodge 884, Monroe. Tom was employed by La-Z-Boy as a department supervisor from 1964 to 1978. He went on to work 18 years for Howard Ternes Packaging Company as a shipping and receiving supervisor before retiring in 2005. Tom is survived by his wife of 53 years, Pamela; three children, Michael T. Stepp of Monroe, Julie A. Kuehnlein of Spanish Fort, AL, and Martin T. (Melissa) Stepp of Monroe; three brothers, Mark Stepp of Milton, FL, Robert (Ann) Stepp, Jr. of Fredric, MI, and Samuel (Darleen) Stepp of Tazewell, TN; two sisters, June Stepp of Crossville, TN and Sandra (Nelson "Eddie") Fortner of Monroe; four grandchildren, Austin Stepp, Emma Kuehnlein, Hunter Stepp, and Erika Stepp. In addition to his parents, Tom was also preceded in death by two sisters, Vergie McNew and Imogene Robertson. Family and friends may visit from 1 p.m. to 8 p.m. Friday at Bacarella Funeral Home where services will be held at 10 a.m. Saturday. Rev. Fr. Philip Ching, pastor of St. Michael Catholic Church will officiate. Cremation will follow in accordance with his wishes. Interment will take place at a future date at St. Joseph Cemetery, Monroe. For anyone wishing to make a memorial donation in Tom's memory, the family suggests St. Jude Children's Hospital.

Thomas A. Stepp, age 76 of Monroe, went to be with his Lord at 2:01 p.m. Tuesday, June 25, 2019. His passing came during his stay at ProMedica Monroe Regional Hospital since becoming seriously ill a month ago. Born October 12, 1942 in Louisville,... View Obituary & Service Information

The family of Thomas A. Stepp created this Life Tributes page to make it easy to share your memories.

Send flowers to the Stepp family.