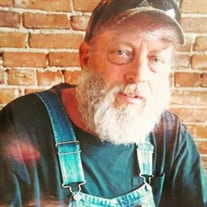 Thomas S. Simpson, age 65, of Rose City, formerly of Carleton, passed away Friday, November 19, 2021, at Munson Hospital, Traverse City after a brief illness. Tom was born May 16, 1956, in Wyandotte, MI, he was the son of Tomas R. and Jean (Woodward) Simpson. He married Dawn M. Gibson September 22, 2001 on the AuSable River Queen. Tom was raised in Carleton; he was the second born and only boy of his parents 10 children. Tom was by nature a caretaker, making sure all his sisters, their families and his own family were cared for. He was tough as nails but had a heart of gold. His family was his pride and joy and that includes his boy Henry and his girl Pearl. At the young age of 17 he joined the U.S. Marine Corp, serving his country during the Vietnam War from 1973 to 1977. In March 1978, Tom was hired by the DT&I Rail Road (which became Canadian National) as a conductor, working for 38 years before his retirement in 2016. He was an avid hunter, hunting any animal that that crossed his path, but especially enjoyed deer and bear hunting. Tom is survived by his wife, Dawn Simpson of Rose City, three children, Joann (Jason) Duford of Clinton, Chris (Simpson) Spegel of Phoenix, AZ and Thomas (Sonia) Simpson, Jr. of Deerfield; six sisters, Carrie (Richard) Wilson of Holly, Tammy (Dan) Wegman of Monroe, Geri Griffin of Monroe, Sarah Hounshel of Carleton, Lisa (James) Boyer of Westland and Michelle “Shelly” Calabrese of Morenci; eight grandchildren, Rachel, Zachary, Alissa, Allyson, Jessica, Cody, Emily and Abbigail. He is preceded in death by his parents, three sisters, Valerie Simpson, Melinda Smith and Jeannie Simpson. In accordance with Tom’s wishes, cremation has taken place and a celebration of life will be held Monday, November 22, 2021, from 1 – 4 p.m. at the Dundee Sportsman Club 2300 Plank Rd. Dundee.     Online condolences and special memories may be shared with the family by visiting the obituary page at www.bacarellafuneralhome.com.

Thomas S. Simpson, age 65, of Rose City, formerly of Carleton, passed away Friday, November 19, 2021, at Munson Hospital, Traverse City after a brief illness. Tom was born May 16, 1956, in Wyandotte, MI, he was the son of Tomas R. and... View Obituary & Service Information

The family of Thomas S. Simpson created this Life Tributes page to make it easy to share your memories.

Send flowers to the Simpson family.