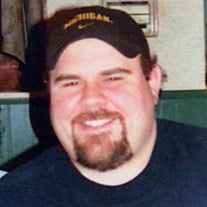 Thomas E. Lindsay, age 50, of Monroe, went home to be with the Lord Sunday, April 25, 2021, in his home, he had been in declining health for six months after being diagnosed with Multiple Sclerosis in 2012. Born February 6, 1971 in Monroe, he was the son of Harvey T. and the late Charlotte M. (Barber) Lindsay. Tom attended St. John Elementary School and Monroe High School, graduating with the class of 1989. He married his beloved wife, Lily Cheryl Cotter, at Crosswinds Marsh in Wayne County on June 8, 2007. He worked for more than ten years at Sylvania Minerals Quarry in South Rockwood, Michigan, as a Heavy Equipment Operator, medically retiring in 1996. Tom had a quirky sense of humor and an uncanny ability to give hilarious one-liners at a moments notice. He was very opinionated about politics and was devoted to his conservative values. Tom was an avid hunter and sportsman, spending many hours in the woods and on the archery range. He loved going on hunting trips with his father, one of which he almost completed the NWTF Grand Slam. He also was proud to have been the sponsor for Michigan youth duck hunts. As all hunters do, Tom looked forward to fall, when the pumpkins were in abundance and he could make his yearly trips to the orchard with his wife to enjoy doughnuts and apple cider. Tom was an amazing cook, Italian cuisine being his favorite to prepare. He was an ardent U of M college sports fan, enjoying most men’s and women’s sports, watching football, basketball, and softball regularly. Tom was baptized and confirmed at St. John the Baptist Catholic Church, Monroe, and was passionate in his belief that Jesus Christ was his Lord and Savior. During his illness, Tom relied deeply on his faith to guide him as his MS progressed. To cherish his memory, Tom leaves his wife, Cheryl of Monroe; father, Harvey Lindsay of Monroe; and many aunts, uncles, and cousins. In addition to his mother, he was preceded in death by his grandparents: Ray and Mary Barber and Leon and Ora Lindsay. Visitation will be held from 1 p.m. until 7 p.m. on Wednesday, May 5, 2021, at Bacarella Funeral Home, 1201 South Telegraph Road, Monroe, MI 48161. Services celebrating his life will follow visitation that same evening at 7 p.m. Deacon Mike Stewart will officiate. In accordance with his wishes, cremation will follow. Memorial contributions in Tom’s memory are suggested to St. Jude Children’s Research Hospital. Tom’s family would like to express their deepest gratitude to the nurses of ProMedica Monroe Hospice for the tireless care they provided to Tom as well as the compassion they expressed to the family. Online condolences and special memories may be shared with the family by visiting the obituary page at www.bacarellafuneralhome.com.

Thomas E. Lindsay, age 50, of Monroe, went home to be with the Lord Sunday, April 25, 2021, in his home, he had been in declining health for six months after being diagnosed with Multiple Sclerosis in 2012. Born February 6, 1971 in Monroe,... View Obituary & Service Information

The family of Thomas E. Lindsay created this Life Tributes page to make it easy to share your memories.