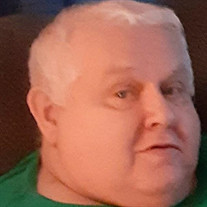 Terry L. Black, age 65, of Monroe passed away at his home on Wednesday, November 16, 2020 after struggling with diabetes for many years and a short battle with liver cancer. Born December 20, 1954 in Monroe, he was the son of the late William Eugene and Margaret Verna (Stockard) Black. Terry attended Monroe High School. He married his beloved wife, Barbara Ann Ellison, on December 20, 1973 in Monroe. Terry worked for Sugar Foods as a truck driver for many years before retiring in 1987. Terry was a man of all trades and enjoyed many different hobbies. He loved to go hunting and fishing. Terry had a passion for bowling, and he was a part of a bowling league. He was also a handyman and an organizer; he would rearrange his living room furniture weekly. Terry played cards often with family and friends. Most of all he was a family man; Terry loved spending time with his grandchildren and great granddaughter, Haisley. To cherish his memory, Terry leaves behind his loving wife of forty-six years, Barbara of Monroe; two Children, Timothy E. (Sherri) Black and Jennifer M. (William) Richardson both of Monroe; five grandchildren: Jasmine S. Black, Ryan A. Black, Bailey N. Nation, Landen J. Rhoads, Aubrey B. Rhoads, Liliana Kurutz, all of Monroe; two great-grandchildren, Haisley N. Black and Grayson Robertson both of Monroe; seven siblings: Larry D. (Sue) Black, Michael F. (Sheryl) Black, Thomas C. (Cathy) Black, Kelly Black, Orville Little Jr., Janie D. Black, and Debra L. (David) Ihring, all of Monroe; and many nieces and nephews. In addition to his parents, Terry is proceeded in death by his brother, Dennis E. Black, of Monroe. In accordance with Terry’s wishes, cremation has taken place and there will be no services are currently scheduled. Bacarella Funeral Home is assisting the family with arrangements. Memorial contributions in Terry’s memory are suggested to the American Diabetes Association.

Terry L. Black, age 65, of Monroe passed away at his home on Wednesday, November 16, 2020 after struggling with diabetes for many years and a short battle with liver cancer. Born December 20, 1954 in Monroe, he was the son of the late William... View Obituary & Service Information

The family of Terry L. Black created this Life Tributes page to make it easy to share your memories.

Send flowers to the Black family.