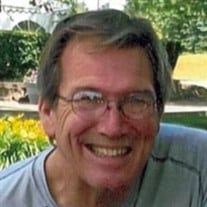 Steven Mark Jukuri, 62 years, of Newport, Michigan, went home to be with the Lord on Saturday, April 18, 2020 in his home after a courageous battle with Multiple Sclerosis. Born November 16, 1957 in Cheboygan, Michigan, Steve was the son of Rev. E.W. “Al” and V. Juanita “Nita” (Murray) Jukuri. Steven was a 1975 graduate of Jefferson High School, where he played football. He went on to attend Monroe County Community College. Steve served his country honorably and proudly in the United States Navy aboard the USS Puget Sound. He served from 1975 to 1977 and received a Meritorious Unit Commendation and the Navy “E” Ribbon. On June 4, 1988 Steve married the former, Diane Cooksey, at Temperance Church of God, Steve’s father, Rev. Al Jukuri, performed the ceremony. Steve worked as a truck driver for USF Holland from which he retired in 2018. He was a member of the Teamsters Local 299. Steve attended both Bethany Baptist Church and Stewart Road Church of God. He was well known for and enjoyed playing the guitar. He played in the Cross Country No Boots Band. He enjoyed playing hockey, cooking delicious meals, and watching University of Michigan Athletics, Detroit Tigers, Lions, Pistons and Red Wings. Most of all Steve enjoyed time spent with family. Steve is survived by his beloved mother; Nita Jukuri of Monroe, three loving sons; Nicholas D. (Holly) Jukuri of Sorrento Springs, FL, Anthony W. (Jennifer) Jukuri of Dundee, and Brandon M. Jukuri of Monroe, six cherished grandchildren; Dante, Blake, Lily, Reese, Saige, and Colton, a brother; Daniel W. (Gloria) Jukuri of Monroe, a nephew; Joseph, two nieces; Amanda and Melinda, a great nephew; Camden and two great nieces; Gracie and Bella. He was preceded in death by his father on June 5, 2019 and his brother; David E. Jukuri on April 2, 1978. Visitation will be held from 11:00 am to 1:00 pm on Monday, April 27, 2020 at Bacarella Funeral Home, 1201 South Telegraph Road, Monroe, Michigan, 48161. Due to the COVID-19 pandemic and keeping with current social distancing rules, only 10 people will be allowed in the room at a time. The staff of the funeral home will be there to assist all visitors. Private funeral services will be held with the Rev. Brenda Jackson, Associate Pastor of Stewart Road Church of God, officiating. Private Interment will be held at Roselawn Memorial Park. Memorial contributions are suggested to a charity of the donor’s choice. Online condolences and special memories may be shared with the family by visiting the obituary page at www.bacarella funeralhome.com.

Steven Mark Jukuri, 62 years, of Newport, Michigan, went home to be with the Lord on Saturday, April 18, 2020 in his home after a courageous battle with Multiple Sclerosis. Born November 16, 1957 in Cheboygan, Michigan, Steve was the son... View Obituary & Service Information

The family of Steven Mark Jukuri created this Life Tributes page to make it easy to share your memories.

Send flowers to the Jukuri family.