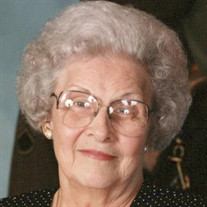 Shirley Frances Monday, age 93 of Monroe, passed away at 11:36 p.m. Sunday, May 30, 2021 in her home. Born March 22, 1928 in Kenvir, Kentucky, Frances was the daughter of the late Henry and Grace (Peters) Tyra. She attended Monroe Public Schools and married Von E. Monday on May 31, 1956 in Angola, Indiana. Von preceded her in death on November 1, 2019. Frances had many jobs in her life. Most notably, she was employed by Stadelman Furniture Company and the Little Dixie Restaurant where she waitressed for many years. Frances, together with her husband Von, were active members and supporters of Monroe VFW Post 1138 where she was a life member of its auxiliary. In her personal time, she enjoyed cooking for her family, doing word search puzzles and watching old rerun television shows, especially westerns. Frances is survived by five children: Annie Oliver of Naperville, IL, Judy Harrington of Corsicana, TX, Jimmilynn Pope of Corsicana, TX, Dawn (Jon) Matteson and Teri Monday, both of Monroe; a sister, Florence Thompson of Pinkerton, OH; nine grandchildren; ten great-grandchildren; and son-in-law, Mike Perkey. In addition to her parents and husband, Frances was preceded in death by three children, John Page, James Page, and Tiny Perkey; grandson, Billy Perkey; three brothers, Orville, Bill, and Jerry Tyra; three sisters, Ruth Fix, Helen Johnson, and Sue Trombley. Family and friends may visit from 2 p.m. to 6 p.m. Sunday at Bacarella Funeral Home where VFW Post 1138 Auxiliary will pay tribute at 5 p.m. Services will be held at 11 a.m. Monday at the funeral home with Frances’ nephew, Rev. David Thompson officiating. Burial will follow at Roselawn Memorial Park in LaSalle. Memorial donations are suggested to VFW Post 1138 or Elara Caring Hospice. The Monday family would like to acknowledge the following staff members of Elara Hospice for the compassionate care given to their mother, Karen, Pete, Jackie, Amy, and Candace, and special thanks to her friend and physician, Dr. James Miller.

Shirley Frances Monday, age 93 of Monroe, passed away at 11:36 p.m. Sunday, May 30, 2021 in her home. Born March 22, 1928 in Kenvir, Kentucky, Frances was the daughter of the late Henry and Grace (Peters) Tyra. She attended Monroe Public... View Obituary & Service Information

The family of Shirley Frances Monday created this Life Tributes page to make it easy to share your memories.