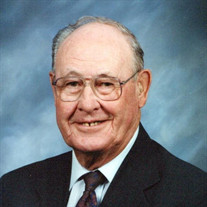 Shelby G. Carter, Jr., age 96 of Monroe, passed away at 6:23 a.m. Tuesday, November 3, 2020 at ProMedica Monroe Regional Hospital. He had been ill for the past two days. Shelby was born on December 11, 1923 in Tazewell, Tennessee to the late Shelby and Allie (Harrell) Carter, Sr. He came to Monroe in 1929 and graduated from Monroe High School in 1942. Shelby honorably served in the U.S. Army during World War II from Feb. 25, 1943 to Dec. 15, 1945. He served in the 904th Field Artillery Battalion and was awarded the EAME Theater Ribbon with 5 Bronze Stars. Shelby married Virginia Almes in Monroe. Sadly, she preceded Shelby in death on July 13, 1980. He later married AnnaBelle M. Bogedain on Jan. 23, 1981 at Christ Lutheran Church. On Dec. 30, 2019, she too passed away. Shelby was employed by River Raisin Paper Company and Union Camp for 45 years. He retired in 1985 as Superintendent of Maintenance. Shelby was a member of Christ Lutheran Church where he ushered for 40 years, Green Meadows Golf Club, and a life member of Moose Lodge 884 and Monroe VFW Post 1138. In addition to golfing, he was a league bowling member in Monroe since 1940. Shelby is survived by a step-daughter, Dianne Oley of Monroe; step-son, George (Patricia) Pfluge of Troy, TN; two brothers, John (Roxi) Carter of Monroe and Joe Carter of Southgate, MI; 20 grandchildren; and several great and great-great-grandchildren. In addition to his parents and wives, Shelby was also preceded in death by a son, Ronald Carter; step-sons, Donald Nation and Willard Pfluge; step-daughter, Judy Hammac; and four sisters. Family and friends may visit from 2 p.m. to 7 p.m. tonight (Friday Nov. 6th) at Bacarella Funeral Home where services will be held at 11 a.m. Saturday. Rev. David Hively, pastor of Christ Lutheran Church will officiate followed by burial at Roselawn Memorial Park with military honors provided by VFW Post 1138. All visitors are politely reminded to follow current facial covering protocols. Memorial donations may be made to a charity of the donor’s choice. Online condolences and special memories may be shared with the family by visiting the obituary page at www.bacarellafuneralhome.com

Shelby G. Carter, Jr., age 96 of Monroe, passed away at 6:23 a.m. Tuesday, November 3, 2020 at ProMedica Monroe Regional Hospital. He had been ill for the past two days. Shelby was born on December 11, 1923 in Tazewell, Tennessee to the... View Obituary & Service Information

The family of Shelby G. Carter, Jr. created this Life Tributes page to make it easy to share your memories.