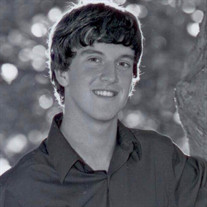 Sean Philip Brady, 18 years, of Monroe, Michigan was born July 12, 1996 and went home to be with the Lord on May 21, 2015. Sean may not have known his life was about to end heading north on Telegraph that Thursday morning. In an instant, a southbound truck towing a semi veered in front of the vehicle he was driving, and he was killed in the horrific collision. No one expects to go so quickly, but God must have found Sean worth taking. Home for the summer, Sean was working as an engineering intern with the Monroe County Road Commission when he died. He had just finished his freshman year at Trine University in Angola, IN, and looked forward to being back with friends and family, continuing the running, soccer playing and other things that made his life good. Anyone who knew Sean knew running and soccer were his passions, and he excelled. At Monroe High School, Sean graduated summa cum laude and was captain of his cross country and track teams. He was in the honors program at Trine University and was a collegiate athlete in cross country and track. Sean was extraordinary. He was that rare person whose joy and enthusiasm for life naturally attracted people to him. He was affable, affectionate and good-natured. In what he did and how he did it, he demonstrated what is right and encouraged those around him to do their best too. Sean was a person whose faith, values and actions were consistent. With the brief time he had, he lived life right. Those who knew him know this too. His character is evident in many of his online postings, like the recent shout out to a man pushing his disabled son in a wheelchair during the Boston Marathon, or this retweet from Pope Francis, "Amid so many problems, even grave, may we not lose our hope in the infinite mercy of God." It is with that hope those who loved Sean trust God has taken him to be with the angels in heaven, where he will surely fit right in. He is survived by parents Richard and Ann, sister Megan, grandmother Patricia Costello and many aunts, uncles, cousins and friends. He is predeceased by maternal grandfather Philip Costello and paternal grandparents Maureen and Desmond Brady. Visitation will be held on Tuesday, from 2-8 PM in the Bacarella Funeral Home, 1201 S. Telegraph Rd, Monroe, MI 48161, where a scripture service will be held at 6:00 PM that evening. On Wednesday, May, 27, 2015 he will lie in state at St. Mary's Catholic Church in Monroe from 10:00 AM until Mass of the Resurrection celebrating his life at 11:00 AM. Fr. David Burgard and Deacon Michael Stewart will officiate. Private interment will follow at St. Joseph Cemetery in Monroe. In lieu of flowers, memorials may be made to the Brady family to establish a scholarship fund in Sean’s honor.

Sean Philip Brady, 18 years, of Monroe, Michigan was born July 12, 1996 and went home to be with the Lord on May 21, 2015. Sean may not have known his life was about to end heading north on Telegraph that Thursday morning. In an instant,... View Obituary & Service Information

The family of Sean Philip Brady created this Life Tributes page to make it easy to share your memories.

Send flowers to the Brady family.