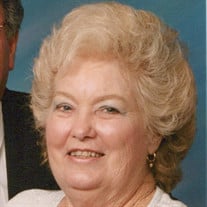 Ruby G. Cangealose, age 90, of Monroe, went home to be with the Lord at 10:35 a.m. on Saturday, November 21, 2020, at Medilodge of Monroe after a lengthy illness. Born December 7, 1929 in Corryton, Tennessee, she was the daughter of the late Buryl and Ethyl (Branson) Harrell. Ruby graduated from Gibbs High School in Corryton and, a short time later, moved to Monroe. She married Don Archer on December 23, 1947 and, after his passing in 1997, Ruby married John J. Cangealose, Sr. at St. Mary Catholic Church in Monroe on December 17, 1999. She was a lifelong homemaker and worked for Sealtest Dairy as the Office Manager from 1951 until 1962, after which she began working for Dr. John LaBoe’s office as the Office Manager until her retirement in 1985. Ruby was a longtime member of Monroe Missionary Baptist Church where she helped in the kitchen and was involved in their Women’s Group. She was a life-member of Monroe Rod and Gun Club, Past-President of the Monroe Arts League and volunteered with the Mercy Memorial Hospital Guild in the surgical area. To cherish her memory, Ruby leaves her beloved husband, John J. Cangealose Senior of Monroe; two stepchildren, John J. (Elaine) Cangealose Junior of Monroe and Andrea (Brian) Lewandowski of Newport; one stepson-in-law, Dale Morgan of Monroe; six grandchildren; and nine great-grandchildren, with one more on the way. In addition to her parents and first husband, Ruby was preceded in death by one stepdaughter, Theresa Morgan; two brothers, Toby and Pete Harrell; and three sisters: Marie Lender, Ann Edwards, and Ruth McGinnis. In lieu of flowers, memorial contributions in Ruby’s memory are suggested to the Heart Fund at Monroe Missionary Baptist Church. Visitation will be held on Friday, November 27, 2020, from 11a.m. until 1 p.m. at Bacarella Funeral Home, 1201 S. Telegraph Road, Monroe, MI 48161. Services celebrating her life will immediately follow at 1 p.m. Due to the COVID-19 pandemic, visitation will be limited to twenty-five persons at a time and those attending are asked to wear face coverings and maintain social distancing guidelines. For those who would like to attend remotely, you may join the family for services via webstream beginning at 12:55 p.m. by visiting the following link: http://www.bacarellafuneralhome.com/obituaries/permalink/9727171/LTWebcast. Rev. Roy Southerland will officiate. A private interment will be held at Roselawn Memorial Park, LaSalle. Online condolences and special memories may be shared with the family by visiting the obituary page at www.bacarellafuneralhome.com.

Ruby G. Cangealose, age 90, of Monroe, went home to be with the Lord at 10:35 a.m. on Saturday, November 21, 2020, at Medilodge of Monroe after a lengthy illness. Born December 7, 1929 in Corryton, Tennessee, she was the daughter of the... View Obituary & Service Information

The family of Ruby G. Cangealose created this Life Tributes page to make it easy to share your memories.

Send flowers to the Cangealose family.