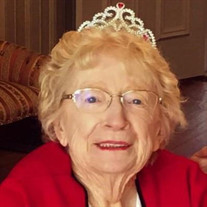 Rose Mary Kennedy, age 93, died on November 22, 2021, surrounded by family at the home of her daughter, Patricia Cousino, in Ypsilanti, Michigan. Rose Mary was born on January 28, 1928 in Detroit, Michigan, and was the child of Irish immigrants, Patrick Francis and Hannah (Kane) Murray, and sister to her two older brothers, Frances and James. She met Eugene H. Kennedy, the brother of her best friend, Patricia, when he returned home from World War II and married him on July 7, 1951, at St. Brigid Catholic Church, Detroit. In 1955, Rose Mary and Eugene moved to Monroe County, living first in North Shores, LaSalle, before moving their large and growing family to Monroe where they settled in the Tagge house on Macomb Street. Rose Mary was a graduate of Mackenzie High School in Detroit and was always proud of the years she studied at University of Detroit, being one of only a few women who did so during that time. As was often the case in the 1950s, Rose Mary left college when she married to help support the family while Gene completed dental school. Rose Mary’s next job as a mother would be her life’s greatest joy. She will be remembered for hosting frequent large family gatherings full of laughter, with coats being piled high on a bed, children and grandchildren scurrying about, always welcomed by Grandma with a plate of Jello jigglers and hugs. Rose Mary, the matriarch, presided over the beautiful chaos, always encouraging a song (even though she could not carry a tune), and the sharing of story upon story upon story around the dining room table. In Rose Mary’s house, everyone was welcome, every new baby was cherished, new marriages were exalted and every sorrow supported with understanding. Anyone who knew Rose Mary well, knew that she was a force of nature and, as her children grew, she found she had so much more to give--and did she ever--to her community. She spearheaded a Catholic religious education program at St. Joseph Parish, Monroe, for members of the community with special needs. From her work as a catechist, Rose Mary developed into an ardent advocate for the broader special needs population of Monroe County. She served on the Monroe County Community Mental Health Board for 24 years, on the board for Mon-ARC (formerly, Association for Retarded Citizens) and was one of the founding members of the Holiday Camp board, a summer camp established for persons with special needs. Rose Mary also was a charter member of Home, Inc. and was known for her tenacity, pushing back on a community reluctant to the establishment of neighborhood group homes. In addition to her advocacy role, she delivered Mobile Meals to seniors, was a member of the Monroe Woman’s Club, as well as the Monroe Thriftshop Association. Rose Mary’s community service was recognized by the Monroe County Bar Association with the Liberty Bell Award in 1988. She was also awarded the Service to Mankind Award by the Sertoma organization. In 1993, Rose Mary was named ARC’s Volunteer of the Year and was the organization’s national honoree as well. In 2001, Rose Mary and Gene together earned the Mercy Memorial Hospital Lifetime Achievement Award recognizing their many contributions to the community. Rose Mary’s faith was always a guidepost in her life of service. She was a member of St. Mary Parish in Monroe for 55 years, during which she became the first female lector in the 1970s. Famously, she told pastor, Fr. Carl Gentner, that she would only agree to serve as long as she was not the “token” female lector. She also served as a Sunday School teacher, extraordinary minister of the eucharist to the homebound and attended the Saturday morning Faith Sharing group. During nearly all of the last four years, Rose Mary was a resident at IHM Senior Living Community in Monroe, where she enjoyed attending Mass with the Sisters and sharing her faith in a weekly Bible study with dear friends. Rose Mary is survived by her children, Sharon Cousineau (Daniel) of Monroe; Karen (Joseph Whinnery) of Wren, Ore.; Patricia Cousino (Kenneth) of Ypsilanti; Timothy of Luna Pier; Joseph (Wendy) of Maybee; Kevin (Kathleen Pitton) of Dearborn; Robert (Cindy) of Hawthorn Woods, Ill., Marie (Jeff Gutschow) of Monroe; 36 grandchildren and 35 great-grandchildren. She was preceded in death by her parents, brothers, her husband, Eugene, and by two children, Michael and Theresa. It is from her same beloved St. Mary parish that Rose Mary’s life will be celebrated. Friends of Rose Mary and the family may call at the Bacarella Funeral Home, 1201 S. Telegraph Rd., Monroe, MI 48162 on Sunday, November 28, from 3–8 p.m., with a Scripture service at 4:00 p.m. She will lie in state at St. Mary Parish Church, 127 N. Monroe St, Monroe, MI 48162, starting at 9:30 a.m. on Monday, November 29, followed by a Mass of the Resurrection at 11:00 a.m. Her interment will take place at St. Joseph Cemetery, Monroe, at a later date. All people attending are politely asked to wear facial covering. In lieu of flowers, the family suggests that memorial donations be made to Holiday Camp: (www.monroeisd.us/departments/specialed/servicesprograms/holidaycamp/)

Rose Mary Kennedy, age 93, died on November 22, 2021, surrounded by family at the home of her daughter, Patricia Cousino, in Ypsilanti, Michigan. Rose Mary was born on January 28, 1928 in Detroit, Michigan, and was the child of Irish... View Obituary & Service Information

The family of Rose Mary Kennedy created this Life Tributes page to make it easy to share your memories.

Send flowers to the Kennedy family.