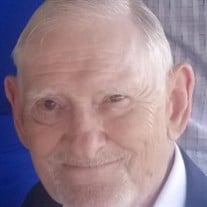 Ronald Lee Waltz, age 77, of Monroe, passed away Sunday, May 8, 2022 in his home surrounded by his family. He had been in declining health, seriously ill the past month. Ron was born March 26, 1945 in Monroe to Victor Frederick and Elva Elizabeth (Mack) Waltz. He married Victoria M. (Vickie) Stritt September 29, 1972 at St. Mary’s Catholic Church in Monroe. He proudly served his country in the US Army from June 25, 1970 until his honorable discharge January 25, 1972. Ron worked for Ford Motor Company at the Rawsonville plant, Ypsilanti, starting February 25, 1966, spending nearly 30 years there until his retirement June 1, 1995. He was a member of Divine Grace Parish, St. Patrick Campus, American Legion Post 66 Carleton, and the Monroe Moose Lodge. Ron was an avid University of Michigan football fan. He also enjoyed gardening, fishing, camping, playing cards, and collecting Elvis memorabilia. He loved to spend time with his grandchildren and one of the things they will always remember about him is how he would make them popcorn the old-fashioned way on the stove top. Ron also had a passion for music and playing drums. In his youth he was the drummer for the Polka Dots, a local Monroe band. Ron is survived by his wife of nearly 50 years, Vickie Waltz, three daughters, Lori (Roger) Harris of Monroe, Jennifer (Jonathan) Elswick of Daleville, VA and Melissa (James) O’Dell of Monroe, six grandchildren, Chelsea (Zachary), Casey (Hannah), Emma, Miranda, Zachary, and Adalynn; one great-grandson, Hudson; three siblings, Edward Waltz of Newport, Janice (Arnold) Reaume of Monroe and Vicky Masserant of Monroe. He is preceded in death by his parents and an infant son. Family and friends may visit from 2 to 8 pm Sunday, May 15, 2022 at Bacarella Funeral Home, 1201 S. Telegraph Rd., Monroe, where a scripture service will be held at 5 p.m. He will lie in state at 10 a.m. at Divine Grace Parish, St. Patrick Campus, with Mass of the Resurrection at 11 a.m. The church pastor, Rev. Michael Woroniewicz will officiate followed by burial at St. Joseph Cemetery, Monroe with military honors provided by Monroe VFW Post 1138. In lieu of flowers, the family suggests memorial donations to the American Cancer Society or Paula’s Angels. Online condolences and special memories may be shared with the family by visiting the obituary page at www.bacarellafuneralhome.com.

Ronald Lee Waltz, age 77, of Monroe, passed away Sunday, May 8, 2022 in his home surrounded by his family. He had been in declining health, seriously ill the past month. Ron was born March 26, 1945 in Monroe to Victor Frederick and Elva... View Obituary & Service Information

The family of Ronald L. Waltz created this Life Tributes page to make it easy to share your memories.

Send flowers to the Waltz family.