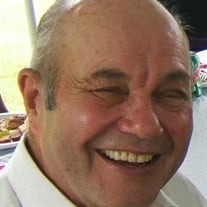 Ronald J. Swartz, 87 years, of LaSalle, Michigan, went home to be with the Lord on Tuesday, March 24, 2020 in his home, with his family at his side. Born June 16, 1932 in Monroe, Ron was the son of the late Lee and Angeline (Anast) Swartz. Ron was baptized and confirmed at St. Mary Catholic Church in Monroe. He also attended St. Mary Grade School and was a 1950 graduate of Monroe Catholic Central where he played basketball. Ron served his country honorably as a Corporal in the United States Army, serving from December 10, 1952 to November 24, 1954. He received the Army of Occupation Medal and the National Defense Service Medal. On August 27, 1955, Ron married the former Bonnie M. Moyers at St. Mary Catholic Church in Monroe. Ron was employed for 32 years at Consumer’s Power in Erie, Michigan from which he retired as a Lab Technician on September 16, 1987. Ron was a member of St. Joseph Catholic Church in Erie, The V.F.W. Post 3925 and the Knights of Columbus, Erie Council 7413. He will be remembered as a Godly man with many memories and laughs from summer vacations camping up north, fishing, gardening, golfing and bowling with his family. He enjoyed volunteering his time with the Knights of Columbus, praying the rosary for fellow Knights at funerals, delivering food to the needy, fundraising and bingo. He dedicated many years to delivering communion to the home bound, weekly Eucharistic Adoration at his church and a lector each week at mass. He had a gift of making people feel valued with his warm personality and infectious smile. Ron loved his church and felt that every St. Joseph parishioner was his friend. He and Bonnie traveled to Rome for the ordination of their grandson and enjoyed spending winters in Oregon with their daughter and grandchildren as well as traveling to Ireland, Mexico and many other states throughout the US. Ron was a man that appreciated the simple things in life with strong morals, faith and dedication to his family and friends. Ron’s greatest accomplishment was raising his six daughters with his wife Bonnie and instilling in them his great faith, which has been passed down to his grandchildren and great grandchildren. Ron is survived by his wife of 64 years; Bonnie, six daughters; Theresa M. Vandendriesche of Medford, OR, Kathleen M. (Don) Conklin of Suwanee, GA, Anne M. (Michael) Foor of Milan, MI, Susan M. Swartz of Ypsilanti, MI, Patricia M. (Chris) Cook of Ida, MI, and Judith M. (Kyle) Harris of Luna Pier, 26 grandchildren, 23 great grandchildren, a sister; Sandra (Loren) Blum of Warren, MI, and Kenneth (Rose) Swartz of Monroe. In keeping with family wishes a private graveside service will be held at St. Joseph Cemetery in Erie, MI with Ron’s grandson, Fr. Ronald Conklin, L.C., officiating. A celebration of Ron’s life with family and friends, will be held at a later date. Memorial contributions are suggested to Sacred Heart Apostolic School, 5901 North 500 East Rolling Prairie IN, 46371, sacredheartapostolicschool.org or Knights of Columbus Council 7413, 9758 S. Dixie Highway, Erie, MI 48133. The Bacarella Funeral Home, 1201 S. Telegraph Rd., Monroe, MI, 48161 is assisting Ron’s family with funeral arrangements.

Ronald J. Swartz, 87 years, of LaSalle, Michigan, went home to be with the Lord on Tuesday, March 24, 2020 in his home, with his family at his side. Born June 16, 1932 in Monroe, Ron was the son of the late Lee and Angeline (Anast) Swartz.... View Obituary & Service Information

The family of Ronald J. Swartz created this Life Tributes page to make it easy to share your memories.

Send flowers to the Swartz family.