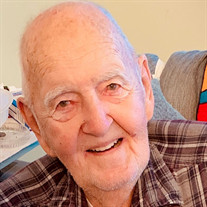 Rolley G. Lindsay, age 88 of Carleton, went home to be with the Lord on Monday, July 26, 2021. Born September 10, 1932, in Powell, Tennessee, he was the son of the late Leon and Lettie (Kerr) Lindsay. Rolley relocated to Monroe in 1950, from Powell, Tennessee. He served his country honorably in the United States Army during the Korean War. On September 20, 1952, Rolley married Wanda J. Pruitt. Together they celebrated 54 years of marriage. Rolley worked as a welder at Dana Corporation for fifteen years, and Detroit Stoker for fifteen years, retiring in 1996. Rolley was a member of Bible Fellowship Church in Monroe. There he drove the church bus for Sunday School and was also a Boy Scout leader. Rolley was a jokester and a storyteller. One often could not tell if his stories were real or made up. He had a love for restoring antique tractors, gardening, racoon and deer hunting and trapping. His favorite four-legged hunting companions were Reno, Blackie, and Red. Rolley was a man of many talents, he was famous for his homemade pizzas which he made not only for his family, but the church’s youth group. He enjoyed listening to music; gospel, country, and bluegrass being his favorites. To cherish his memory, Rolley leaves six children: Vickie (Richard) Rose of Monroe, Lowell (Cathy) Lindsay of Monroe, Rev. Dr. Rodney (Debbie) Lindsay of Goosecreek, South Carolina, Robby (Pam) Lindsay of Newport, Ricky (Kim) Lindsay of Newport, and Randy Lindsay of Monroe; eleven grandchildren: Erin (Becky) Rose, Eric (Marsha) Rose, Adam Lindsay, Julie Lindsay, Lynette (Corey) Dickerson, Bradley (Elsie) Lindsay, Rachael Lindsay, Melissa (Kenny) Foshag, Sarah Lindsay, Ricky Lindsay, and Nicholas Lindsay; twelve great-grandchildren, with one on the way; one great-great-grandchild, with one on the way; and sister-in-law, Sharon Lindsay. In addition to his parents, Rolley is preceded in death by his wife, Wanda, two brothers, Billy and Paul Lindsay and sister Rose Russell. Visitation will be held from 2:00 p.m. to 8:00 p.m. on Monday, August 2, 2021, at Bacarella Funeral Home, 1201 South Telegraph Road, Monroe, MI 48161. Services celebrating Rolley’s life will be held the following day, August 3, 2021, at Bible Fellowship Church. He will lie in state at 10:00 a.m. with services to follow at 11:00 a.m. Rev. Andy Hill, Pastor of the church, will officiate. Burial will follow at Woodland Cemetery, Monroe. Memorial contributions in Rolley’s memory are suggested to Bible Fellowship Church.

The family of Rolley G. Lindsay created this Life Tributes page to make it easy to share your memories.