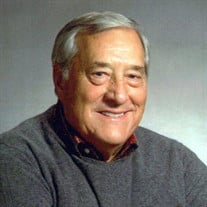 Roger L. Kreps, 90 years, of Monroe, Michigan, went home to be with the Lord on Sunday, April 4, 2021 in his home. Born December 19, 1930 in Toledo, Ohio, Roger was the son of the late Chester and Gladys (Harwick) Kreps. He attended a one room schoolhouse on Yargerville Road, was a 1949 graduate Dundee High School, and received a bachelor’s degree from Michigan State University. Roger served his country honorably and proudly in the United States Air Force. He served from 1951 to 1955 as a mechanic and attended the California School of Aeronautics. On January 23, 1954 Roger married the former, Marilyn G. Gordon, in Phoenix, AZ. Sadly, she preceded him in death on September 21, 1992. Roger then married Marjorie A. (Corl) Knabusch on March 4, 1995 at Prince of Peace Lutheran Church in Ida, Michigan. While attending Michigan State University Roger worked for John Bean Company as a design engineer. He then went to work for FMC Corporation as a salesman from which he retired in 1992. Roger was an active member of Prince of Peace Lutheran Church where he served as a Deacon and helped with the roast beef dinners. He was also a member of Rotary. He enjoyed playing board games, Sudoku, and crossword puzzles. Roger will be remembered as a kind, caring man with a wonderful sense of humor and a great love for family. Roger is survived by his beloved wife of 26 years, Marge, three loving children: Scott W. (Karen Manson) Kreps of Webberville, MI, Marc K. (Joanne) Kreps of Amagansett, NY, and Lori S. (Bob) Hennessey of Suwanee, GA, five loving stepchildren: Jeffery A. (Judi) Knabusch of Somerset, KY, Pamela L. (Michael) O’Neill of Slidell, LA, Robert W. (Kim) Knabusch of Whitmore Lake, MI, Laurie A. Sherman of Ida, MI and Michael T. Knabusch of Monroe, 13 cherished grandchildren: Mitchell, Natalie, Chelsea, Taylor, Sydney, Angela, Jennifer, Eric, Kelly, Ryan, Kristen, Bradley, and Nicklas, 10 treasured great grandchildren; a sister, Shirley Anteau of Temperance and a sister in law, Shirley Kreps. In addition to his parents, Roger was preceded in death by two brothers: Charles and Lee, a brother in law, Jerry Anteau and a sister in law, Jane Kreps. Visitation will be held on Friday from 2-8 PM at Bacarella Funeral Home, 1201 S. Telegraph Rd. Monroe, Michigan, 48161. On Saturday, April 10, 2021, Roger will lie in state from 10:00 am at Prince of Peace Lutheran Church in Ida, where funeral services celebrating his life will begin at 11:00 am. The Rev. Ted D. Kerr, III, pastor of the church, will officiate. In Keeping with Roger’s wishes, cremation will follow. Memorial contributions are suggested to Prince of Peace Lutheran Church or the Rotary Foundation.

Roger L. Kreps, 90 years, of Monroe, Michigan, went home to be with the Lord on Sunday, April 4, 2021 in his home. Born December 19, 1930 in Toledo, Ohio, Roger was the son of the late Chester and Gladys (Harwick) Kreps. He attended a... View Obituary & Service Information

The family of Roger L. Kreps created this Life Tributes page to make it easy to share your memories.

Send flowers to the Kreps family.