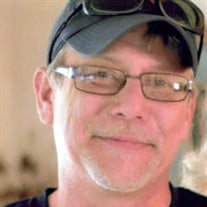 Robert “Rob” W. Hensley, age 56, passed away Tuesday, November 17, 2020 at Promedica Monroe Reginal Hospital after losing his battle with cancer. Born June 21, 1964 in Monroe, Rob is the son of William and Sue (Weaver) Hensley. He was a 1982 graduate of Monroe High School. Rob married his beloved wife, Tammy Maiden, on October 13, 1990 at Monroe Full Gospel Church. Rob started his career at Viking Paper where he worked for ten years. He later worked for Ford Motor Company Michigan Assembly, Wayne, for twenty-four years before retiring in 2019. Rob enjoyed spending all the time he could with his children and grandchildren. He was an avid sports fan and loved watching just about any sport; the Detroit Lions football team was by far his favorite. He also looked forward to participating in the Shawn Nolan fantasy football league. Rob enjoyed playing golf and golfed in the Slammers league for many years. Rob loved all things outdoors and music. To cherish his memory, Rob leaves behind his beloved wife of thirty years, Tammy; two children, William Hensley and Courtney (Thomas) Riggs both of Alamogordo, New Mexico; two grandchildren, Carter and Hudson Riggs; and a brother, Jeff Hensley of Adrian Michigan. In accordance with Rob’s wishes cremation has taken place and memorial visitation will be held at Bacarella Funeral Home 1201 South Telegraph Road, Monroe, MI 48161 on Wednesday, November 25, 2020, from 1:00 p.m. to 6:00 p.m. with services celebrating his life to follow at 6:00 p.m. Rev. Larry Detruff will officiate. Private interment of his cremated remains will take place at Rath Cemetery at a later date. Due to the current COVID-19 pandemic face coverings must be worn and social distancing guidelines must be followed. Memorial contributions in Rob’s memory are suggested to his family.

The family of Robert W. Hensley created this Life Tributes page to make it easy to share your memories.

Send flowers to the Hensley family.