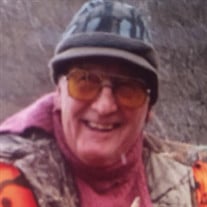 Robert E. Baker, age 88, of Dundee, passed away on Friday, October 8, 2021, at Hampton Manor. Robert was born August 8, 1933, in Manitou Beach, Michigan, he was the son of Albert E. and Estella M. (Koder) Baker. He married Bernice L. “Lou” Cooper on June 21, 1952, in Adrian; sadly, she preceded him in death November 27, 2019. He was employed as a firefighter for the City of Riverview in the 1960’s and then worked for DTE for 38 years before his retirement in 1990. He served on the Raisinville Township Zoning Board and was a volunteer, in charge of the shuttle service for the Monroe County Fair Association. He was a member of the East Rockwood Sportsman Club and enjoyed hunting, trapshooting and cutting firewood. He is survived by three children, Craig (Valarie) Baker of Adrian, Patricia (Jerry) McLaughlin of Maybee, Cheryl (Randy) Thomas of Livonia; a daughter-in-law, Colleen Baker of Monroe; ten grandchildren and sixteen great grandchildren. In addition to his wife, he is preceded in death by his parents, a son, Lynn Baker; four siblings and their spouses, Albert (Alma) Baker, Richard (Robbie) Baker, Lucy (Dick) Shepherd and Jean (Bill) Bowerman. Visitation will be held from 10 a.m. to 1 p.m. Thursday, October 14, 2021, at Bacarella Funeral Home 1201 S. Telegraph Rd. with funeral services beginning at 1 p.m. Pastor David Cornwell, of Careline Hospice, will officiate. Burial will follow at Rath Cemetery. Online condolences and special memories may be shared with the family by visiting the obituary page at www.bacarellafuneralhome.com.

The family of Robert E. Baker created this Life Tributes page to make it easy to share your memories.

Send flowers to the Baker family.