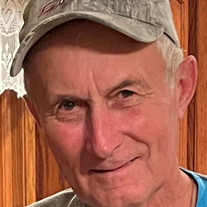 Robert “Bob” W. Arenz, age 76 of Monroe, is now in the presence of our Savior, Jesus and won the victor’s crown on November 13, 2021. Bob was born on October 29, 1945 in Maybee, Michigan. He was the son of William & Dorothy (Rusch) Arenz. Bob graduated from Ida High School in 1964. Shortly after, he served our country from Nov. 4, 1965 untill being honorably discharged on Nov. 3, 1967 as a U.S Marine. He defended our country during the Vietnam War and earned the National Defense Service Medal, Vietnamese Service Medal with 2 Stars, Republic of Vietnam Campaign Medal with Device, Rifle Marksman Badge, and the Good Conduct Medal. Following his time in Vietnam, Bob was promoted to Sergeant at Camp Pendleton, California. A day after he was discharged, he was already beginning a new adventure. He captured the heart of his bride with his deep blue eyes. Then in 1969 on February 14th, Valentines’ Day, Bob and Shirley M. Devos were married at St. Michael Catholic Church. Bob loved Shirley so much that he would watch Hallmark, mostly Christmas movies, every night with some popcorn and a pepsi. He even “let” Shirley win during their nightly Skipbo games (according to Bob anyway). And though they deeply loved each other, you never saw the two get more competitive than with that game. They had two lovely daughters: Lisa (Hartman) and Amy (Zangara) along with two sons-in-law, Robert Hartman II and Christopher Zangara, but to Bob, they were sons. Bob had four grandchildren: Christopher Jr, Michaela, Robert III, Patrick, who he loved more than life. Not to mention the grand dogs that he spoiled rotten. Bob retired in 2004 after a career with Operating Engineers Local 324. He was a master in heavy equipment excavating and everything he laid his hands on. He was the “go to guy” and even after he lost his arm to his second round with cancer, he continued to skillfully operate all of his toys and was the first person anyone wanted to be working on their house or project. He could operate the machines with his eyes closed and do it better than anyone. Bob knew the answer to everything and held an abundance of wisdom that is hard to match. He was certainly the jack of all trades. He very much enjoyed cruising on his golf cart with Shirley, playing euchre, watching his grandchildren’s ball games (where he was their biggest cheerleader and designated scorekeeper), and cleaning anyone’s and everyone’s dirty car windows. You would never catch him idle, he always found something to do and it was normally not for himself. But most of all, Bob loved his family. There wasn’t anything he wouldn’t and didn’t do for them. To say Bob Arenz was an inspiration would be an understatement. To know him was to be inspired by him. He touched every heart he crossed and put his own heart into everything he did. Not one time did you ever hear Bob say “I can’t”. Even when all odds were stacked against him, he had such a positive outlook and determination in him to “keep looking forward”. Words cannot possibly justify or express how wonderful a Husband, Dad, Papa, Brother, Uncle, and friend Bob truly was. But actions speak louder than words, and anyone who knew Bob, knew he could never sit still or help himself from lending a hand, always putting others before himself. He was a true friend and one of the most amazing people anyone could or will ever meet. Bob was known for many things to many people, but almost everyone knew him to be the guy with a smiling face, waving as they drove by, whether he knew you or not. Bob is survived by his beloved wife of 52 years, Shirley, his 2 daughters Lisa and Amy, both of Monroe, three cherished grandchildren, Patrick, Michaela and Christopher and his sister Carol (Robert) Trombly of Newport. Bob was preceded in death by his precious grandson Robert III and his amazing parents, William and Dorothy Arenz. Visitation will be held on Wednesday, November 17, 2021 from 2 p.m. to 8 p.m. at Bacarella Funeral Home, 1201 S. Telegraph Rd. Monroe, MI. Bob will lie in state Thursday at Stewart Road Church of God where he was a member. At 11 a.m., Executive Pastor, Rev. Matthew Peavy will celebrate Bob’s amazing life. Interment will follow at St. Joseph Cemetery where military honors will performed by Monroe VFW Post 1138. Memorial contributions are suggested to Stewart Road Church of God. Online condolences and special memories may be shared with the family by visiting the obituary page at www.bacarellafuneralhome.com.

The family of Robert W. Arenz created this Life Tributes page to make it easy to share your memories.

Send flowers to the Arenz family.