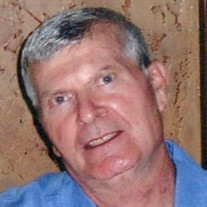 On Saturday, March 27, 2021, Richard Lee Parran, Sr., 82, of Monroe, passed away at ProMedica Monroe Regional Hospital surrounded by his family. The son of William and Marie (Scheich) Parran, he was born on October 14, 1938 in Monroe. He married Cynthia Nickles September 22, 1962 at St. John’s Catholic Church in Monroe. Together they raised four children. Richard had a passion for sports. He loved to go fishing, hunt, garden, and travel up-north. He stayed active by running, walking, bowling, and playing with his grandchildren. He enjoyed going to pro sporting events and attending his children’s and grandchildren’s sporting events. He was known for his quick wit, his infectious smile, and his kind and compassionate spirit. Richard was a graduate of Monroe High School, Class of 1958. He was employed at La-Z-Boy Chair Company at the plant on Union Street in Monroe where he proudly assembled chairs until transferring to the headquarters building on Telegraph Road (1965-1979). He then worked at Monroe Public Schools until retiring in 2003. In his spare time, he was an umpire for Monroe City Parks & Recreation, umpiring softball and baseball games up to five times a week. He was a life-long member of St. John’s Catholic Church in Monroe. Richard was preceded in death by his father, William, and his mother, Marie; four brothers, Arthur, James, Anthony, and William Jr., three sisters, Lucille Smith, Mildred Kuehnlein, and Betty Bashaw. In addition to his wife, Cindy of 58 years, he is survived by his four children, Richard Jr. (Joan) Parran of Monroe, Roberta (David) Ziemann of Newport News, VA, Stephen (Laura) Parran of Monroe, and Stephie Parran of Murrells Inlet, SC; sister Henrietta VanDuser of Monroe, seven grandchildren, Zachary Parran of New Boston, Nicole (Ziemann) Szpila of Ardmore, PA, Ryan Ziemann of Newport News, VA, Joshua Parran of Toledo, OH, Matthew and Nicholas Parran of Monroe, and Evan Boley of Murrells Inlet, SC; and three great-grandchildren Anastasia, Frederick, and Abraham Szpila of Ardmore, PA. Friends may visit Tuesday, Mar. 30th, from 2 to 8 p.m. at Bacarella Funeral Home where the Rosary will be recited at 7 p.m.. He will lie in state from 10:00 a.m. until Mass of the Resurrection at 11:00 a.m, Wednesday at St. John Catholic Church in Monroe. The Rev. Fr. David Burgard, pastor of the church, will officiate. Interment will follow at St. Joseph Cemetery, Monroe.

On Saturday, March 27, 2021, Richard Lee Parran, Sr., 82, of Monroe, passed away at ProMedica Monroe Regional Hospital surrounded by his family. The son of William and Marie (Scheich) Parran, he was born on October 14, 1938 in Monroe. He... View Obituary & Service Information

The family of Richard Lee Parran Sr. created this Life Tributes page to make it easy to share your memories.

Send flowers to the Parran family.