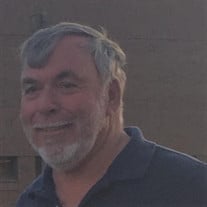 Richard E. LaBeau, 72 years, a lifelong resident of Monroe, Michigan, passed away Tuesday, October 5, 2021 in his home. Born in Monroe, Dick was the son of the late Wesley and Angeline (Braun) LaBeau. He attended Monroe Catholic Central High School. On November 26, 1966, Dick married the love of his life, the former Rosemary Czarnik, at St. Mary Catholic Church in Monroe. Dick owned and operated LaBeau Building and Remodeling for many years. He truly enjoyed his work. He built his family home as well as building homes for his two daughters and his two brothers. Dick enjoyed boating and was a former member of Detroit Beach Boat Club and a current member of The Eagles, Elk’s, and The Moose. He along with his family spent many vacations boating and eventually navigated all of Michigan’s Great Lakes. He also enjoyed snowmobiling and motorcycling. In recent years his passion was rebuilding and refurbishing antique automobiles. He and Rosemary attended many antique car shows and were invited to many car club events. Most of all Dick loved time spent with family. Dick is survived by his beloved wife of 54 years, Rosemary, two loving daughters: Vicki L. (Keith) Petree of Monroe and Aimee L. (Nicholas) Kusina of Temperance, six cherished grandchildren: Mitchell, Matthew, Madison, and Mason Petree, and Max and Henry Kusina, and two brothers: David (Dottie) LaBeau of Monroe and Donald (Patricia) LaBeau of Tecumseh. In addition to his parents, Dick was preceded in death by his stepfather, Robert Langton and a sister, Marilyn Robinson. Visitation will be held on Saturday, October 9, 2021 from 2 – 5 pm at Bacarella Funeral Home, 1201 S. Telegraph Rd., Monroe, Michigan, 48161. In keeping with Dick’s wishes cremation will follow. In lieu of flowers memorial contributions are suggested to Project I AM or to a charity of the donor’s choice. Online condolences and special memories may be shared with the family by visiting the obituary page at www.bacarellafuneralhome.com.

The family of Richard E. LaBeau created this Life Tributes page to make it easy to share your memories.

Send flowers to the LaBeau family.