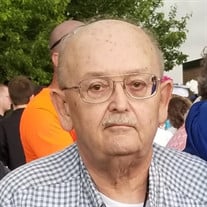 Richard Lee Kraatz, 72 of Ypsilanti, Michigan, formerly of Monroe, passed away unexpectedly at 2:01 p.m. Sunday, March 10, 2019, at his home. Born June 28, 1946 in Detroit, Michigan, he was the son of the late Lee and Blanch “Dolly” Marie (Rogers) Kraatz. He attended Cody High School, graduating with the class of 1964 and earned his Associate’s degree from Henry Ford Community College. Richard married Judith “Judy” Diane Renz on September 28, 1968 in Detroit. Sadly, she preceded him in death on September 24, 2005. Richard worked for Ford Motor Company for more than thirty years as a Tool and Die Maker, retiring in 2003. During his employment, he authored several I.S.O. manuals for the company, which standardized operations and were used in plants all over the world. Richard was a member of the U.A.W. Local 600, Fraternal Order of Eagles, National Rifle Association, Michigan Open Carry and several organizations related to Armature Radio/HAM Radio. He was an ardent supporter of President Donald Trump and was a member of the Republican National Community Presidential Advisory Board. Richard had many hobbies; some of which were: boating, collecting firearms, shooting at his son’s home and camping in Jackson, Michigan. He loved driving fast cars and was looking forward to taking delivery of his 2019 Chevrolet Camaro SS2 that he and his son, Jason, special ordered. Richard cherished spending time with his family and especially loved his grandchildren. Richard was a proud HAM Radio operator, going by the call-sign N8YQW and was an operator for the SKYWARN program, a division of the National Weather Service. He also assisted with the Comair Flight 3272 airplane crash in 1997. To cherish his memory, Richard leaves two sons, Richard Lee Kraatz II of Garden City, Michigan and Jason (Shelly) Kraatz of Monroe; loving companion, Karen Shubert of Ypsilanti; one brother, Robert “Bob” Kraatz of Livonia, Michigan; three grandsons: Hunter, Austin and Zachary Kraatz; and his beloved dog, Gizmo P. Kraatz. In addition to his parents and wife, he was preceded in death by one sister, Marilyn Mosser. Visitation will be held on Thursday, March 14, 2019, from 1 p.m. until 8 p.m. at Bacarella Funeral Home, 1201 North Telegraph Road, Monroe, MI, 48161. Services celebrating his life will begin at 11 a.m. Friday, also at Bacarella Funeral Home. Chaplain Michael Gilbert of ProMedica Hospice will officiate. In accordance with Richard’s wishes, cremation will follow. Memorial contributions in Richard’s memory are suggested to the Armature Radio Relay League, 225 Main Street, Newington, CT, 06111.

The family of Richard Lee Kraatz created this Life Tributes page to make it easy to share your memories.

Send flowers to the Kraatz family.