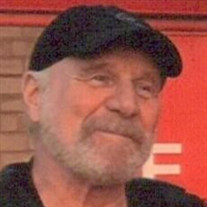 Richard J. Ernest Sr., age 70 of Dundee, passed away at his home surrounded by family 8:23 p.m. Thursday, December 31, 2020, after a long battle with cancer. Born August 11, 1950 in Monroe, Richard was the son of the late Charles and Marcella (Gonyea) Ernest. He was a graduate of Carlson High School. Richard served his country honorably in the United States Army during the Vietnam war. On April 4,1992, Richard married the love of his life, Kathleen D. Laird in Brownstown Twp. Richard worked for Ford Motor Company in Woodhaven for many years in tool and die before retiring in 1994. He was a member of the Disabled Veterans of America and a proud member of Alcoholics Anonymous with twenty-seven years of sobriety. Richard had an outgoing personality, he never met a stranger. He had a love for motorcycles and always enjoyed riding. He also enjoyed riding ATV’s, dirt bikes, snowmobiles, he even participated in quad racing. He also enjoyed visiting and playing slot machines at casinos. Richard, most of all, loved spending time with his family and grandchildren; he attended all of their sporting events and was always their biggest cheerleader. To cherish his memory, Richard leaves his wife of twenty-eight years, Kathleen; three sons: Richard (Amalie) Ernest Junior, Ryan Ernest, and Tony (Tia) Laird; eight grandchildren: Ryan Jr., Raelynn, Austin, McKenzie, Liam, Kenna, Genevieve, and River; and one brother, Raymond Ernest. In addition to his parents, he was preceded in death by two sisters, Judith Meade and Phyllis Ernest Evans; two brothers-in-law, Tom Meade and Tom Evans; a sister-in-law, Sharon Ernest; his mother-in-law Marion Herdell and Step father-in-law Earl Herdell; and step mother-in-law Gail Yvonne McWherter. Visitation will be held Tuesday, January 5, 2021, from 12 p.m. until 6 p.m. at Bacarella Funeral Home, 1201 South Telegraph Road, Monroe, MI 48161. Services celebrating Richard’s life will be held the same day, following visitation. He will be interred at Great Lakes National Cemetery at a later date. Memorial contributions in Richard’s memory are suggested to the family.

Richard J. Ernest Sr., age 70 of Dundee, passed away at his home surrounded by family 8:23 p.m. Thursday, December 31, 2020, after a long battle with cancer. Born August 11, 1950 in Monroe, Richard was the son of the late Charles and Marcella... View Obituary & Service Information

The family of Richard John Ernest Sr. created this Life Tributes page to make it easy to share your memories.

Send flowers to the Ernest family.