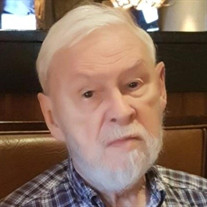 Richard F. Bodoh, age 88 of Powder Springs, GA, formerly of Monroe, passed away Saturday, November 7, 2020 at Tranquility at Cobb Hospice in Austell, GA. Born September 23, 1932 in Monroe, MI, Richard was the son of the late Richard and Evelyn (Lazette) Bodoh. He attended McKenzie High School in Detroit and graduated from Southfield Trade School which lead to a long career with Ford Motor Company in Livonia. After 36 years, Richard retired in 1989 as a Quality Control Inspector Richard honorably served his country in the U.S. Army during the Korean War from Nov. 12, 1952 to Nov. 12, 1954. On June 22, 1957, Richard married Mable E. Fisher at First Presbyterian Church in Monroe. Together, they raised four children. While residing in Monroe, Richard was a member of First Presbyterian Church for many years where he served as a Deacon and an assistant Scout Leader for Troop 14. He was also an Auxiliary Police Deputy for Monroe County, and a life member of the Monroe County Rod and Gun Club. At various times in his life he enjoyed hunting, fishing and scuba diving. As husband and wife, they enjoyed spending time Up North, cruise ship vacationing, spending winters in Florida and California, and traveling in their motor home. Richard is survived by his wife of 63 years, Mable Bodoh; a son Michael (Michele) Bodoh of Monroe; two daughters, Kim (James) Keck of Powder Springs, GA and Mary (Marcel) Mommerency of Monroe; six grandchildren and eight great-grandchildren. In addition to his parents, Richard was also preceded in death by a son, Anthony, in 1996, and a sister, Shirley Ann Durham, in 2019. Due to safety concerns of the Covid-19 pandemic, a memorial service is being considered for a later date. Bacarella Funeral Home is assisting the family with funeral and cremation arrangements. For anyone considering a memorial donation at this time, the family suggests supporting the American Heart Association or Tranquility at Cobb Hospice in Austell, GA.

The family of Richard F. Bodoh created this Life Tributes page to make it easy to share your memories.

Send flowers to the Bodoh family.