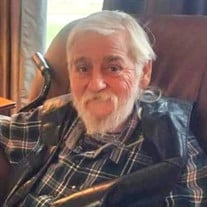 Raymond Bajor, 72, of Monroe, Michigan, passed peacefully, with his loving wife and family by his side, on Monday November 29th, 2021 from complications due to a hard fought battle with COVID-19. Born July 27th 1949, in Monroe, Michigan, he was the son of Edward and Alice(Szuma) Bajor. Ray attended St. Patrick's Parish grade school. As a young man, he worked on the Bajor farm with his family. He was a 1967 graduate of Monroe Catholic Central. In 1967, Ray was drafted into the United States Army, and shortly after, enlisted in the 101st airborne Screaming Eagles. While serving in the Vietnam war, he received a Vietnam service medal, a Bronze Star, an Army Commendation Medal, a Republic of Vietnam Gallantry Cross with Palm, a National Defense Service Medal, Combat Infantryman Badge, Air Medal, 2 Presidential Unit citations and a purple heart. Soon after returning home, he met and married the love of his life, Sandy Hopkins. They enjoyed riding motorcycles together and he became a founding member of the Carleton Motorcycle club, where they spent many years making memories with great friends. He built a successful custom painting business, "Above the Rest", where in 2001, his decorated art work was displayed on the Harley Davidson of the President of the Detroit Lions. Ray was an avid Lions and U of M football fan. You could find him and his oldest grandson, Gavin, watching football together every weekend. He was a family man and will be remembered for all the things he did for his country and all the sacrifices he made for his family. Ray lived life to the fullest and was truly a free spirit. Ray will be sadly missed by his wife of nearly 49 years, Sandy Bajor; two wonderful children: Leeann (Bajor) and Jim Mackin, Heidi Bajor and Jay Cardella, and two grandsons Gavin Bajor and Owen Mackin. Five siblings: Mr. and Mrs. Edward (Maria) Bajor Jr., Mr. and Mrs. Neil (Dorris) Russeau, Mr. and Mrs. Gary (Jeanette) Krauss, Mr. and Mrs. Al (Sue) Geiger, and Mr. and Mrs. Mark (Lyn) Langton. And many nieces, nephews, cousins,family and friends. He was proceeded in death by his parents Mr. and Mrs. Edward (Alice) Bajor, his In-Laws Mr. and Mrs. John (Jaunita) Hopkins, 2 brother in laws, Mark Langton and David E. Bergmooser. Visitation will be held from 2 to 7 p.m. Thursday, December 2, 2021 at Bacarella Funeral Home 1201 S. Telegraph Road, Monroe where funeral services will be held at 11 a.m. Friday. Burial will follow at Roselawn Memorial Park. LaSalle, with military honors by VFW Post 1138 Memorials may be made to Vietnam Veterans of America at www.vva.org

Raymond Bajor, 72, of Monroe, Michigan, passed peacefully, with his loving wife and family by his side, on Monday November 29th, 2021 from complications due to a hard fought battle with COVID-19. Born July 27th 1949, in Monroe, Michigan,... View Obituary & Service Information

The family of Raymond Bajor created this Life Tributes page to make it easy to share your memories.

Send flowers to the Bajor family.