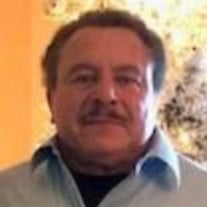 Ray A. Moran, age 62 of Temperance, passed away Friday afternoon after experiencing a medical emergency while driving with his wife Kimberly in Bedford Twp. Fortunately, she suffered no injuries after safely slowing the vehicle before it struck a tree. Ray was pronounced deceased of apparent natural causes at ProMedica Toledo Hospital where he was taken after the accident. Born January 10, 1958 in Monroe, Ray was the son of the late Stephen and Genevieve (Russo) Moran. He married Charlotte K. Calkins on May 20, 1978 in Monroe and later married Kimberly K. Gill at their home in Temperance on September 3, 1995. Ray graduated from Monroe High School in 1976 and earned a Bachelor of Science degree in education from Adrian College in 1981. He went on to receive a Master of Science degree in 1988 from the University of Wisconsin and a Ph.D. in Educational Leadership from Capella University in Minneapolis, Minnesota in 2010. A stand-out football player at Monroe High School, Ray played for Adrian College where he was All Conference and Team Captain. He also was the 1981/82 State of Michigan Powerlifting Champion and the 1981 Inter Collegiate Powerlifting Champion. Ray then began a long career in coaching and teaching. Not surprising, he became a strength and conditioning coach. While coaching at Wisconsin and Iowa Universities, Ray got to experience Peach Bowl, Rose Bowl, and Holiday Bowl appearances. In 1987, Ray received the National Strength and Conditioning Association, Director of the Year Award. Additional coaching history also includes Bedford High School, Eagle’s Landing High School in McDonough, Georgia and Henry County Football in Georgia. In 2001, Ray was inducted into the Adrian College Hall of Fame. Personal interests of Ray’s include golfing and a love for woodworking and furniture building. Together with his wife, they took great pride in creating an outstanding garden each year. Ray is survived by his wife Kimberly; two sons, Mike (Kathy) Moran of Temperance and Alec (Larissa) Moran of Griffin, Georgia; seven grandchildren: Masyn, Karlie, Westyn, Tatym, Kadym, Houstyn, and Addyson; and a sister, Donna Sykes of Tennessee. Family and friends may visit from 3 p.m. to 8 p.m. Wednesday, July 29th at Bacarella Funeral Home where services will be held at 11 a.m. Thursday. All visitors are reminded to adhere to current facial covering protocols. Following his funeral, Ray will be cremated in accordance with his wishes. For anyone wanting to make a memorial donation in Ray’s memory, the family suggests supporting the Humane Society of Monroe County.

Ray A. Moran, age 62 of Temperance, passed away Friday afternoon after experiencing a medical emergency while driving with his wife Kimberly in Bedford Twp. Fortunately, she suffered no injuries after safely slowing the vehicle before it... View Obituary & Service Information

The family of Ray A. Moran created this Life Tributes page to make it easy to share your memories.

Ray A. Moran, age 62 of Temperance, passed away Friday afternoon...

Send flowers to the Moran family.