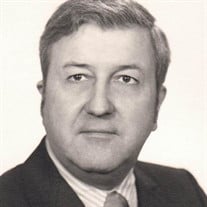 Ralph B. Manausso, 98 years, a lifelong resident of Monroe, Michigan, went home to be with the Lord on Tuesday, August 6, 2019 in his home with his family at his side and his wife Marris holding his hand. Born November 5, 1920 in Monroe, Ralph was the son of the late Bert and Marie (Venier) Manausso. He was a 1938 graduate of Monroe High School. On November 19, 1945 Ralph married his beloved wife, the former Marris J. Bender, at St. John the Baptist Catholic Church. Ralph along with Robert and Joseph Duffey formed Jones Transfer Company in Monroe in 1945. Ralph served as the Executive Vice President and Vice President of Operations until assuming and retiring as the Chairman of the Board. However, his experience in trucking goes much deeper, as his family were owners and operators of Manausso Trucking. Ralph was a lifelong member of St. John the Baptist Catholic Church in Monroe where he was baptized, confirmed, married, and sat on the Executive Committee of the Parish Council. Other memberships included; Monroe Club, St. Nick’s Club, North Cape Yacht Club, Stewart Corinthian Yacht Club, Motor City Traffic Club of Detroit, the Michigan Trucking Association, Monroe Golf and Country Club, Elks Club, and was a Fourth Degree member of The Knights of Columbus. He was a board member of the Monroe Port Commission, Peoples Federal Saving and Loan, and served as a past director for the Monroe County Chamber of Commerce. He and his wife enjoyed traveling all around the world, both with friends and with the Nomad Travel Club. Most of all Ralph enjoyed time spent with family. Ralph is survived by his beloved wife of 73 years, Marris, three loving children; Barbara (Charles) Harrington of Monroe, Polly (Edward) Shaffran of Ann Arbor, MI, and Lisa Manausso of Monroe, five cherished grandchildren; Chip (Kelli) Harrington, Ralph (Michelle) Harrington, Alexis (Robb) DeVries, Carli (Nic) Epperson, and Zack Loop, and four treasured great grandchildren; Maxx, Chaz, Parker, and Quinn Harrington. In addition to his parents, Ralph was preceded in death by four sisters; Marie Herzog, Rita Duffey, Jean (Taft) Ryan, and Dorothy Wuest, and two brothers; Clyde and Robert. In keeping with Ralph’s wishes, cremation has taken place. Memorial visitation will be held on Saturday, August 31, 2019 at St. John the Baptist Catholic Church in Monroe, from 10:00 AM until Mass of the Resurrection celebrating Ralph's life at 11:00 AM. Entombment will be held at St. Joseph Cemetery in Monroe. Memorial contributions are suggested to St. Jude Children's Hospital or St. Mary Catholic Central High School The Bacarella Funeral Home, 1201 S. Telegraph Rd., Monroe, Michigan is assisting Ralph’s family with funeral arrangements.

Ralph B. Manausso, 98 years, a lifelong resident of Monroe, Michigan, went home to be with the Lord on Tuesday, August 6, 2019 in his home with his family at his side and his wife Marris holding his hand. Born November 5, 1920 in Monroe,... View Obituary & Service Information

The family of Ralph B. Manausso created this Life Tributes page to make it easy to share your memories.

Ralph B. Manausso, 98 years, a lifelong resident of Monroe, Michigan,...

Send flowers to the Manausso family.