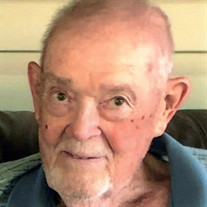 Paul W. Lindsay, age 82 of Monroe, passed away peacefully in the early morning hours of Wednesday, March 31, 2021 in his home. He had been in declining health for several years and at home in hospice care for the past two months. Born June 27, 1938 in Powell, TN, Paul was the son of the late Leon and Lettie (Carr) Lindsay. He moved to Monroe in 1951 and married Sharon K. Vershum on July 31, 1958 in Erie, MI. An honorably discharged veteran of the U.S. Army, Paul served from November 20, 1961 to November 19, 1963. While stationed in Germany, he was proud to have been selected to serve as an Honorary Guard to President John F. Kennedy when he visited Germany in 1963. As a machine operator, Paul was employed by Dana Corporation in Trenton and Ecorse for many years, retiring in 1984. Paul was a long time member of Bible Fellowship Church and enjoyed reading his Bible, listening to his audio Bible, and also listening to country music. Paul loved traveling and camping with his family and attending his grandchildren’s sports and other school functions. Paul will be remembered for his outgoing personality. He enjoyed meeting new people, he talked to everyone and told stories and jokes to them as if he had known them forever. Paul is survived by his wife Sharon; two daughters, Kimberly (David) Long of Monroe and Michelle (Jeff) Bennett of Bowling Green, OH; a brother, Rolley Lindsay of Carleton; four grandchildren: David (Megan) Long, Joel Long, Sydney Bennett, and Lauren Bennett; three great-grandchildren: Bentley Long, Hailey Long, and Connor Long. In addition to his parents, Paul was also preceded in death by a daughter, Juanita Louise Lindsay; sister, Rose Russell; brother-in-law, Wayne Russell; and sister-in-law, Wanda Lindsay. Family and friends are invited to attend a graveside service at 1 p.m. Friday, Apr. 16th at Woodland Cemetery. Rev. Andy Hill, Pastor of Bible Fellowship Church and retired Pastor, Rev. Jim Walker, will officiate. Military honors will be provided by Monroe VFW Post 1138. Bacarella Funeral Home is assisting the family with funeral arrangements. Memorial donations are suggested to ProMedica Hospice or Bible Fellowship Church.

Paul W. Lindsay, age 82 of Monroe, passed away peacefully in the early morning hours of Wednesday, March 31, 2021 in his home. He had been in declining health for several years and at home in hospice care for the past two months. Born... View Obituary & Service Information

The family of Paul W. Lindsay created this Life Tributes page to make it easy to share your memories.

Paul W. Lindsay, age 82 of Monroe, passed away peacefully in...