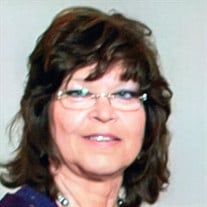 Patricia A. Hopper, age 61 of Monroe, passed away at 1:41 a.m. Wednesday, May 20, 2020 at ProMedica Monroe Regional Hospital. She had been in declining health for eight years. Born December 25, 1958 in Middlesboro, Kentucky, Pat was the daughter of the late Tunney and Betty (Carey) Hopper. She graduated from Monroe High School in 1977 and married Edward Hoffer in 1978 at St. Michael Catholic Church. From this union, she was blessed with three children. In 1989, Pat married Eudon Wilson, Sr. and again was blessed with three more children. Pat was employed by Mazda/AAI/Ford Motor Company in Flat Rock for many years before having to take an early medical retirement. Her hobbies included doing crafts, playing the board game Aggravation, and “Retail Therapy” shopping. Pat is survived by six children: Edward (Heather) Hoffer of Monroe. Michelle (Blair) Honeycutt of Monroe, Brandy (George) Crites of Monroe, Eudon (Melissa) Wilson, Jr. of LaSalle, Brooke Wilson of Monroe, and Brittany (Randy Bray) Wilson of Monroe; a brother, Charles (Brenda) Hopper of Monroe; 13 grandchildren: Dustin, Drew, Sierra, Riley, Tommy, Olivia, Brina, Brenden, Chase, James, Jacob, Mitchell, Aubrey, and soon to arrive, Eudon Wilson, III. In addition to her parents, Pat was also preceded in death by a brother, Donald Hopper. Family and friends may visit from 11 a.m. to 1 p.m. Saturday, May 23rd at Bacarella Funeral Home. The funeral home staff will politely direct social distancing protocols by allowing ten people in the viewing room at a time. There will be a funeral procession to Roselawn Memorial Park at approximately 1:15 p.m. where Rev. B.J. McDaniel will preside at a graveside service at 2 p.m. For anyone wanting to make a memorial donation in Pat’s memory, the family suggests supporting Elara Home Care in Adrian, Michigan.

Patricia A. Hopper, age 61 of Monroe, passed away at 1:41 a.m. Wednesday, May 20, 2020 at ProMedica Monroe Regional Hospital. She had been in declining health for eight years. Born December 25, 1958 in Middlesboro, Kentucky, Pat was... View Obituary & Service Information

The family of Patricia A. Hopper created this Life Tributes page to make it easy to share your memories.

Send flowers to the Hopper family.