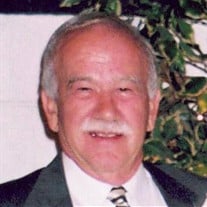 Nicholas M. Bosanac, Sr., a lifelong resident of Monroe, Michigan went home to be with the Lord on Thursday February 13, 2020 in his home. He passed peacefully surrounded by his loving wife and family. Born September 5, 1935 in Monroe, Nick was the son of the late Michael and Dorothy (Trefen) Bosanac. Nick attended Lincoln Elementary School graduating in 1953 from Monroe High School. On October 2, 1954 Nick married his beloved wife, the former Dorothy G. Hoffer, at Grace Lutheran Church in Monroe. Nick served his country proudly and with honor in the Army National Guard of Michigan for nine years and was called up to serve in the United States Army on active duty from October 1, 1961 to August 9, 1962. Nick worked for the Detroit Stoker Co. as a pattern maker, foreman and finally as a renewal salesman from which he retired in 1995. While at Stoker, Nick was also a proud member of the United Steelworkers Union, serving as Recording Secretary and on the negotiating committee. He also operated the family farm for 40 years and enjoyed discussing farming with anyone. After his retirement Nick worked as a machinist at Pump Engineering in Monroe and worked for his nephew, David Graves, building custom homes. Nick was a faithful and devout member of St. George Serbian Orthodox Church in Monroe and a former member of the Loyal Order of Moose and the Tamburitza Association of America. He previously was a 4-H Leader and enjoyed farming and gardening, for which he was especially proud. Nick was a craftsman and enjoyed working on projects for anyone, but especially his extended family. He was also a mechanic, builder and skilled at carpentry work. He enjoyed spending time in his woodshop and taking side jobs to build and or remodel most anything. Nick and Dorothy were able to enjoy many winters at their vacation home in Sun City Center, Florida, where they enjoyed bicycling, walking and many of the area’s cultural events. They also were able to travel the country and around the world, visiting the birthplace of his father and grandfather. Nick was proud of his Serbian heritage and he often greeted family and friends with a traditional toast of Serbian Brandy. Most of all, Nick enjoyed spending time with family. Nick is survived by his beloved wife of 65 years, Dorothy, six loving children; Nicholas M. Bosanac, Jr., of LaSalle, Paula J. Miracle of Carleton, Dorothy “Dottie” M. Bosanac, of Monroe, Michael G. (Annette) Bosanac of Monroe, Mark S. (Michelle) Bosanac of Rochester, MI and Eve C. Bosanac of Monroe, eleven cherished grandchildren; Jessica (Terry), Nicole, Stephanie (Chad), Nicholas III (Kylie), Lindsay (Curt), Lesley, Dylan, Michael II, Anthony, Alexandria, and Zackary, fifteen treasured great grandchildren; Addison, Brynn, Natalie, Faith, David, Eli, Reece, Hannah, Nicholas IV, Hazen, Conner, Katie, Brenden, Rylee and Bode and three siblings; Simica “Sis” (Reni) Iocoangeli, Michael (Patricia) Bosanac, and Rodney (Marge) Bosanac all of Monroe. In addition to his parents, Nick was preceded in death by three sisters; Katherine Bosanac, Eileen Flynn, and Mary Graves and two brothers; George and Peter, and a son in law; Michael Miracle. Visitation will be held on Tuesday, February 18, 2020 from 1-8 p.m. in the Bacarella Funeral Home, 1201 S. Telegraph Rd., Monroe, Michigan, 48161 where a Pomen Service will be held that evening at 7:00 pm. On Wednesday, February 19, 2020 he will lie in state at St. George Serbian Orthodox Church in Monroe from 10:00 am until funeral services celebrating his life at 11:00 am. Fr. Rade Obsenica, pastor of the church will officiate. Entombment will follow at Roselawn Memorial Park, LaSalle. In lieu of flowers memorial contributions are suggested to St. George Church Altar Fund or the American Cancer Society.

Nicholas M. Bosanac, Sr., a lifelong resident of Monroe, Michigan went home to be with the Lord on Thursday February 13, 2020 in his home. He passed peacefully surrounded by his loving wife and family. Born September 5, 1935 in Monroe,... View Obituary & Service Information

The family of Nicholas M. Bosanac Sr. created this Life Tributes page to make it easy to share your memories.

Send flowers to the Bosanac family.