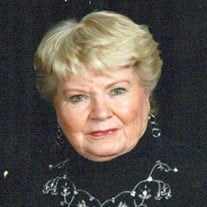 Natalie Merica Eckfeld, age 95 of Brooklyn, MI, formerly of Monroe, passed away peacefully at 11:33 a.m. Tuesday, September 1, 2020 at Henry Ford Allegiance Hospice in Jackson. Born as Natalie Louise Merica on March 25, 1925 in Rensselaer, IN, her birth is from the union of the late Stanley Boyer Merica and Marjorie Ruth Hill. She graduated from Stillwell High School in Stillwell, IN in 1943 and attended Indiana Business College in Indianapolis. Upon completing her studies, “Nan”, as she was known, worked as a clerk for the Veteran’s Administration office processing benefit applications prior to being married. To assist the war effort during WWII, Nan was proud to work as a welder, building Navy pontoons in LaPorte, IN. While attending business college, she met her future husband, Norman Carleton Eckfeld (later to be Dr. N. Carl Eckfeld). The two were married on March 30, 1947 in Rensselaer and later moved to Monroe where Nan managed her husband’s chiropractic business from 1949 until his passing in 1985. In 2015, Nan moved to Brooklyn, MI to be near her children. While residing in Monroe, Nan was a member of First Presbyterian Church, Altrusa Club, Monroe Golf and Country Club, and Mercy Memorial Hospital Guild. She enjoyed traveling, golfing, playing gin rummy, and was a fan of Detroit Tigers Baseball and men’s professional golf. Surviving are two sons, Craig and Brian Eckfeld of Onsted, MI; a daughter, Joan (Randy) Jackson of Brooklyn, MI; grandson, Matthew (Aarti Ogirala) Eckfeld of New York City; step-granddaughter, Rachel (Brian) Johns, and step-great-grandchildren, Ryan and Randy York, all of Belleville, MI; and 15 nieces and nephews. Nan, the oldest of 7 children, is also survived by a brother, Gene (Kay) Merica of Hope, ID and a sister, Janet (Walter) Gross of Indianapolis, IN. In addition to her parents and husband, Dr. Carl Eckfeld, Nan was also preceded in death by brothers, Charles, Stanley, and Bradley Merica, and a sister, Sue Felder. In keeping with Nan’s last requests, cremation and interment will be at Roselawn Memorial Park. No services will be scheduled. Bacarella Funeral Home is assisting the family. For anyone wanting to make a memorial donation, it was Nan’s wish to support the American Red Cross.

The family of Natalie Merica Eckfeld created this Life Tributes page to make it easy to share your memories.

Send flowers to the Eckfeld family.