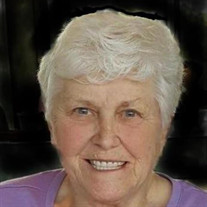 Nancy “Daisy” Nemeth, age 85, passed away peacefully on the morning of Christmas day, December 25, 2021 at her residence at Fountain View of Monroe. She was born and raised in Yonkers, NY and moved to Detroit, Michigan upon getting married to husband Steve. After living in Dearborn for several years after daughter Vicki was born, they were finally able to buy a new house in Westland and moved in just as son Brian arrived. Nancy lived there for 52 years after which she relocated to Creekside senior housing in Monroe. She was the beloved wife of the late Steve Nemeth, loving mother of Vicki and Brian (Lesley), proud grandmother of Steven (Deanna), Megan (Michael), Eric (Lexi), Jeffrey, and Matthew (Karen), and great-grandmother of six. Her sister, Elsie, and parents Herman and Elfrieda pre-deceased her. Nancy worked for many years for Ford, General Motors, and Detroit Diesel in administrative positions until she retired in 2001. She also spent over 20 years as a volunteer English riding instructor for the John F. Ivory Farms Girl Scout program in White Lake. When the program closed, she purchased her two favorite horses, Bar Bucket and Red Beau, and rode them every day until she was 72. Nancy always described herself as quite the tomboy in her younger years, and had aspired to be a female pilot in an age where that was frowned upon. Later in life she enjoyed going on trail-riding vacations with Ivory friends, loved activities like hot air ballooning, concerts, and theater, and later on was still packing her walker into her car and blazing off on new adventures. Her spirit continued even into her 80’s as she listened to her favorite rock music group Queen, loved the Game of Thrones and Outlander television series, was an avid reader, was known for still remembering everyone’s birthdays, and continued to live independently on her own for as long as possible despite being confined to a wheelchair. Her family and all who knew her will miss her deeply. Any memorial contributions might be made in her name to the Wildlife Recovery Association in Shepherd, MI (wildliferecovery.org) which she supported and avidly attended their wildlife presentations - even in her wheelchair - or Girl Scouts or the Humane Society. There will not be a memorial service at this time but online condolences may be shared at www.bacarellafuneralhome.com.

Nancy &#8220;Daisy&#8221; Nemeth, age 85, passed away peacefully on the morning of Christmas day, December 25, 2021 at her residence at Fountain View of Monroe. She was born and raised in Yonkers, NY and moved to Detroit, Michigan upon getting... View Obituary & Service Information

The family of Nancy "Daisy" Nemeth created this Life Tributes page to make it easy to share your memories.

Nancy “Daisy” Nemeth, age 85, passed away peacefully on the morning...

Send flowers to the Nemeth family.