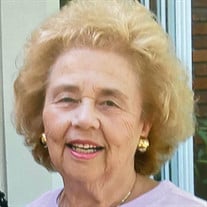 Nancy Jean (Gray) Hochradel, 91 years, of Monroe, Michigan, went home to be with the Lord on Thursday, June 4, 2020 at Elderly Solutions in Monroe. Born March 16, 1929 in Clinton, Michigan, Nancy was the daughter of the late Leonard and Florence (Kern) Gray. She was a 1946 graduate of Clinton High School and attended Cleary College in Ypsilanti, Michigan where she would meet her future husband, Russell Hochradel, of Monroe, Michigan. Nancy and Russell were married on July 30, 1949 in Clinton, Michigan, and soon settled in Belleville, Michigan. After moving to Fostoria, Ohio due to Russell’s employment with Ford Motor Company, they returned to Michigan in 1967 and settled in Russell’s hometown of Monroe. They would be married for 57 wonderful years and blessed with 7 children before sadly Russell died on November 4, 2006. Anyone who knew Nancy knew she had a gift for gab and was at ease talking to a total stranger. After becoming an empty nester, she enjoyed working at the Gift Loft upstairs in Monroe Upholsterers until it closed. A few years later she worked at Mitchell’s Gift Shop where she spent her time waiting on customers and creating beautiful packages complete with beautiful bows. You knew you were special if you received one of Nancy’s beautifully wrapped packages. Nancy was a sports enthusiast who especially loved cheering for her beloved Detroit Tigers and the University of Michigan and attending her children and grandchildren’s sporting events. She had a strong sense of community and was a member of the Monroe County Historical Society for many years. She especially looked forward to working at the Martha Baker Country Store every year during Michigan Week with her dear friend Phyllis Kurtz, selling penny candy to the school children who would visit. Besides taking care of her family, Nancy’s two passions in life were gardening and her beloved cats. She had many cats come and go through her life and they provided her with much comfort and companionship in her later years. She also loved sitting on her back porch watching the birds, especially her beloved cardinals. Her favorite time of the year was the spring and summer when her tulips, hyacinth and daffodils would begin to bloom and she could get outside again and “play in the dirt” and start planting her favorite annuals. She was especially known around the neighborhood for her giant red geraniums she planted all around the house. In her later years Nancy’s idea of a great day was going for a long car ride with Kevin checking out the newest renovations and restaurants in downtown Detroit, or checking out the campus in Ann Arbor, or just watching the seagulls and eagles at Sterling State Park. She also loved a day of shopping, chatting and lunching with her daughters. Most of all Nancy was a woman of great faith and conviction and even in her later years when faced with the loss of her memories, her faith in the Lord never waned and she never questioned the path that the Lord has chosen for her. She was a life-long member of St. Mary’s Parish where she taught catechism classes, worked bingo to raise funds and dutifully served as a Minister of the Eucharist for many years. To Cherish her memory, Nancy leaves behind seven children; Gregory (Mary) Hochradel of Milan, MI, Susan Evanski of Chelsea, MI, Ann (Dale) Phillips of Monroe, MI, Jody Banciu of Grosse Ile, MI, Scott (Patty) Hochradel of Monroe, MI, Kevin Hochradel of Monroe, MI, and Amy (Steve) Gabel of Maumee, OH; thirteen grandchildren, Kelly (Jay) Lake, Holly (Judd) Strohmeyer, Matthew (Jessica) Hochradel, Daniel Evanski, Nicholas (Cristina) Phillips, David Evanski, Kimberly Evanski, Andrew Hochradel, Timothy Hochradel, William Hochradel, Christopher Hochradel, Katherine Gabel, Emily Gabel; four great-grandchildren Austin Lake, Kelsey Mullen, Alexis Lake, Ada Gray Strohmeyer, and three more great grandchildren expected by the end of the year. In addition to her husband, Nancy was preceded in death by her five siblings; Lynwood Gray, Rosamond (Rosie) Wallace, Mary Jane Merillat, June Wiegle, and Hope Feeney; her two beloved sons-in-law, Dan Evanski and Lou Banciu; two great grandsons, Aidan Lake and Hogan Phillips. Visitation will be held from 2-8 p.m. on Tuesday, June 9 at Bacarella Funeral Home 1201 South Telegraph Rd. Monroe, MI 48161. Nancy will lie in state Wednesday, June 10, 2020 at St. Mary’s Catholic Church in Monroe, MI at 10-11 a.m. until Mass of the Resurrection celebrating her life at 11 a.m. Interment will follow at St. Joseph Cemetery in Monroe. The family would especially like to thank the Staff of Elderly Solutions for the special care and attention they gave Nancy these past few years. Memorial contributions may be made to: Monroe County Humane Society, Monroe County Historical Society or Gabby’s Grief Center.

Nancy Jean (Gray) Hochradel, 91 years, of Monroe, Michigan, went home to be with the Lord on Thursday, June 4, 2020 at Elderly Solutions in Monroe. Born March 16, 1929 in Clinton, Michigan, Nancy was the daughter of the late Leonard and... View Obituary & Service Information

The family of Nancy Jean Hochradel created this Life Tributes page to make it easy to share your memories.

Send flowers to the Hochradel family.