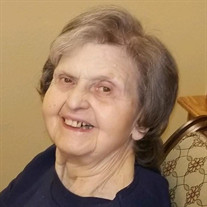 Nancy Ann Cardella, 91, passed away at 5:17 a.m. Wednesday, June 17, 2020 at Brookdale Senior Living in Monroe. She was born on August 21, 1928 in Bellevue, Ohio, the youngest child of Biaggo and Angeline (Natole) Castrovince. Nancy graduated in 1946 from Bellevue High School, after which she worked in various administrative positions. On July 6, 1957 she married Gabriel John Cardella at Immaculate Conception Church in Bellevue. Soon after their marriage, Gabe’s job transferred him back to his hometown of Monroe where they lived and raised their family. They were long-time members of St. Mary Monroe where Nancy volunteered with the Daughters of Isabella and the St. Vincent DePaul Society. She also volunteered for Meals on Wheels and as a Campfire Girl Leader. Gabe passed away in July 14, 1991. When her youngest child was in middle school, Nancy decided to go back to work and was quickly hired by McDonald’s. She spent over 30 years, mainly at the Telegraph Rd. location, making many friends while ensuring that the dining room was spotless and shining. She retired from there in 2005 as one of the longest tenured hourly employees of McDonald’s. In early 2006 she moved to Fuquay-Varina, North Carolina. There, she was a member of St. Bernadette Catholic Church and for several years, worked as a greeter at Wal-Mart. Due to declining health, she moved to Brookdale in 2016. She is survived by her children Pam (Tony) Alachi of Holly Springs, NC; John (Debbie Ann) of Monroe, GA and Robert (Kristin) of LaSalle; grandchildren Gabriel, Anthony and John Alachi and Robby (Nicole), Alyssa and Megan Cardella. In addition to her husband, she was preceded in death by her parents and brothers Michael (Phyliss), Charles (Jodie) and Louis Castrovince and sisters Carlina (Lonnie) Ireland, Mary (Cedric) Ransom and Rose (Kenneth) Kirschener. Family and friends may visit from 10 a.m. to 11 a.m. Saturday at St. Mary Catholic Church. At 11 a.m., Mass of the Resurrection will be celebrated by the church pastor, Rev. Fr. David Burgard followed by interment at St. Joseph Cemetery. In lieu of flowers, the family suggests supporting the American Cancer Society or the Alzheimer’s Association. Bacarella Funeral Home is assisting the family.

The family of Nancy Ann Cardella created this Life Tributes page to make it easy to share your memories.

Send flowers to the Cardella family.