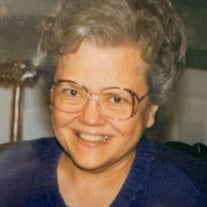 Myrna Doon Vollmer, born August 26,1933, departed this earth on January 5, 2020 at The Lutheran Home in Monroe, Michigan after an extended battle with lymphoma. She was 86 years old. Myrna was born in La Salle, Michigan, the 12th great granddaughter of William Bradford, First Governor of Plymouth Colony. Myrna was a fifth generation Michigander, her great-grandfather Lucien Bonaparte Miller having come to La Salle around 1832, noted in the historical record of the state as one of its early pioneers and civil servants: he served as justice of the peace and in the state legislature for two terms. These histories are known to us because Myrna was a passionate and meticulous researcher and amateur historian, with a skill for bringing family history to life for her nieces and nephews. She was also an extremely gifted amateur photographer, with a uniquely mechanical mind that allowed her to fix even the most minute inner workings of ancient photographic equipment, music boxes and more. To the nieces, nephews, great nieces and great nephews who will feel her absence most acutely, she was the kind of aunt you only read about in stories--one who made every day a great adventure. In her professional life, Myrna worked for decades for Stanley Home Products. In later life, she was one of the founders of the Alice Lorraine Care Center in Monroe, which was named after her mother. Myrna was preceded in death by her parents, Fred August Vollmer and Alice Lorraine Munson Vollmer of LaSalle, Michigan; two siblings, Leo Vollmer and Lorene Vollmer Carter; and a nephew, Ronald Vollmer, of Monroe, Michigan. She is survived by nieces Sue Carter Ansari of Palo Alto, California; Nancy Vollmer Wilson of LaSalle, Michigan; nephews James Carter of Bellevue, Michigan; Kevin Carter of Lincoln, Nebraska; and Jerry Vollmer of LaSalle, MI., and a score of great, as well as great-great, nieces and nephews. A private memorial service will be conducted later this week at Roselawn Cemetery by Jim Hamstra of the Monroe Seventh-Day Adventist Church, where Myrna was a devoted lifetime member. The Bacarella Funeral Home, 1201 S. Telegraph Rd., Monroe, Michigan is assisting the family with funeral arrangements.

Myrna Doon Vollmer, born August 26,1933, departed this earth on January 5, 2020 at The Lutheran Home in Monroe, Michigan after an extended battle with lymphoma. She was 86 years old. Myrna was born in La Salle, Michigan, the 12th great... View Obituary & Service Information

The family of Myrna Doon Vollmer created this Life Tributes page to make it easy to share your memories.

Send flowers to the Vollmer family.