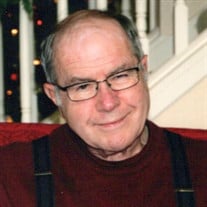 Michael James Yaeger passed away peacefully at his home on Monday, December 7, 2020. Mike courageously battled Parkinson’s disease for 20 years and while it robbed him of so much, it didn’t stop him from living life to the fullest. He was born on January 23, 1938 in Monroe to Norbert and Veronica (Thompson) Yaeger. Mike was a 1955 graduate of Catholic Central High School and attended the University of Detroit and the University of Toledo. In perhaps the smartest move of his life, he married Lois (Heckel) Yaeger on January 3, 1959, and they would have celebrated 62 years of marriage in a couple of weeks. In 1957 Mike joined the family business, Yaeger’s Shoes, which had been started by his great-grandfather, Emmanuel, in 1846. In 1964 he purchased the business from his father and uncles, Edwin and Leo Yaeger, thereby becoming the 4th generation to own the store. In the ensuing 40 years Mike taught a countless number of young employees, including all five of his children, the right way to run a business with emphasis on cleanliness, customer service and a strong work ethic. He made sure his kids knew that “when your name is on the door you have to work twice as hard.” In 1992 Mike sold the store to his son Gregg (5th generation) and Joel Whalen. He eventually retired in 2003 (once he knew Gregg and Joel were doing a good job!). He also had the drive to expand the business by opening Red Wing Shoe Stores. He opened his first store in Lincoln Park in 1977. In 1982 he partnered with Norm Johnson, whom he had mentored for years, to open a store in Toledo. Mike and his son, Steve, opened a second Toledo location in 1989. In 1992 a store was opened in Canton, Michigan. Mike was baptized as an infant at St. Mary Catholic Parish and remained an active member until his passing. He was an usher, lector, one of the first lay ministers and for many years served on Parish Council including as President. He was also involved in the Jaycees from 1968 – 1974. He served as President of the Monroe Chapter, Executive VP for the State of Michigan and on the Board of Directors for the U.S. Jaycees. He loved traveling the state in his 1968 Dodge Dart attending chapter meetings; many of his closest friends he first met through the Jaycees. Mike was also a past president of the Monroe Chamber of Commerce, served on the Board of Directors of the Michigan Retailers Association and was a member of the Mercy Memorial Hospital Board. He took his organizational talents later in life to the Monroe Family YMCA. He discovered he very much loved the sport of tennis; he ran the men’s tennis league for over 20 years and spent a number of years as the Chief Volunteer Officer raising funds to support the Y. In spite of his busy schedule Mike prioritized time with his family. He was a man that could not sit still so on Sundays, the only day he had off from the shoe store, he would take the family to Mass followed by a trip to the donut store. After that, he would lead the kids in chores around the house – some were designated to wash the cars on the front lawn (so the grass would be watered at the same time), one person would be vacuuming the cars out, one person would be mowing the back yard and a couple more would be cleaning the pool. Once chores were done the neighborhood kids would come over and Mike would hit fly balls for what seemed like hours. Even the females were required to know how to catch a fly ball! He also loved ice cream, a stiff scotch and water, spending time in Northern Michigan with family and friends and telling a good (and maybe not so clean) joke. Surviving Mike are his loving wife, Lois, brother, William, sister, Ann Connolly, and children Steven (Tina), Michelle (Craig) Joseph, Renee (Tim Beck) Goethe, Yvonne (Todd) Stoner and Gregg (Holly). Mike also leaves 13 adoring grandchildren: Michael Yaeger, Elisa Yaeger, Veronica (Ryan) Roemer, Christina (Tyler) Carmony, Paul Joseph, Becca Joseph, Anne (Tyler) Jenks, Joseph Goethe, Jacob Goethe, Jonathan Stoner, Jenna Stoner, Quinn Yaeger, Avery Yaeger and 4 great-grandchildren: Owen and Lucy Jenks, Madeline Carmony and Ruby Roemer. He was predeceased by his parents, brother, John, brother-in-law, Donald Connolly, and sisters-in-law, Lenore and Geraldine Yaeger. The family would like to thank Right At Home for their compassionate care of Mike. We so appreciate Jeanne, Marlene, Celeste, Kali, Lisa, Blair and Kayla who were with us this last week. We also extend our thanks to ProMedica Hospice for their guidance. Visitation will be held from 4 p.m. until 7 p.m. with a scripture service beginning at 7 p.m. on Friday, December 11, 2020 at Bacarella Funeral Home, 1201 S. Telegraph Road, Monroe, MI 48161. Due to the COVID-19 pandemic, visitation will be limited to twenty-five persons and those attending are asked to wear face coverings and maintain social distancing. He will lie in state at 9 a.m. Saturday, December 12, 2020, at St. Mary Catholic Church, Monroe, where Mass of Christian Burial will be celebrated by the church Pastor, Rev. Fr. David Burgard, and Rev. Fr. Brian Chabala. Due to COVID-19 restrictions, only immediate family will process to St. Joseph Cemetery for committal services. In lieu of flowers, please consider a donation to St. Mary Catholic Parish or the Monroe Family YMCA. For those who would like to attend remotely, you may join the family for Mass via webstream beginning at 9:55 a.m. Saturday, December 12, 2020 by visiting the following link: https://www.facebook.com/St-Mary-Parish-Monroe-MI-206554542771619 Online condolences and special memories may be shared with the family by visiting the obituary page at www.bacarellafuneralhome.com

Michael James Yaeger passed away peacefully at his home on Monday, December 7, 2020. Mike courageously battled Parkinson&#8217;s disease for 20 years and while it robbed him of so much, it didn&#8217;t stop him from living life to the fullest.... View Obituary & Service Information

The family of Michael James Yaeger created this Life Tributes page to make it easy to share your memories.

Michael James Yaeger passed away peacefully at his home on Monday,...

Send flowers to the Yaeger family.