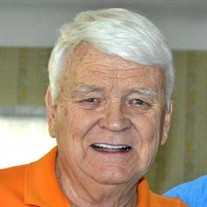 Michael J. Whalen, age 77 of Monroe, went to be with the Lord Thursday morning, May 30th at ProMedica Monroe Regional Hospital. He had been in declining health for two months. Born June 23, 1941 in Clinton, IA, Mike was the son of the late Joseph and Carolyn (McConnell) Whalen. At the age of 21, he moved to Monroe to work at Kline's Department Store. As the consummate salesman and gentleman, Mike went on to work for Monroe Upholsterer's, Johnson's Fine Furniture, Stearns and Foster Mattress Company, and finally La-Z-Boy Furniture Gallery. On June 5, 1965, Mike married Theresa R. Cicero at St. Joseph Catholic Church where he was an active member for many years. Together, they raised two sons, Jeff and Joel. Mike was an avid golfer and tennis player. He was a fan of SMCC High School athletics and college football, especially Notre Dame. He attended St. Mary Catholic Church and was a former member of the Monroe Club. Mike is survived by Theresa Whalen; his sons, Jeffrey Whalen of LaSalle and Joel (Colleen) Whalen of Monroe; a sister, Mary Jo Monaghan of Clinton, IA; and his beloved grandchildren, Drew, Jacob, Lukas, and Abigail. Family and friends may visit from 2 p.m. to 8 p.m. Monday at Bacarella Funeral Home where a Scripture Service will be held at 7 p.m. by Deacon Michael Stewart. He will lie in state at 10 a.m. Tuesday at St. Mary Catholic Church where Mass of the Resurrection will be celebrated at 11 a.m. by the church pastor, Rev. Fr. David Burgard. Cremation will follow in accordance with Mike's wishes. Interment will take place at a later date at St. Joseph Cemetery. For those wanting to make a donation in Mike's memory, the family suggests helping a student in need by donating to the SMCC Scholarship Fund. Online condolences and special memories may be shared with the family by visiting the obituary page at www.bacarellafuneralhome.com.

Michael J. Whalen, age 77 of Monroe, went to be with the Lord Thursday morning, May 30th at ProMedica Monroe Regional Hospital. He had been in declining health for two months. Born June 23, 1941 in Clinton, IA, Mike was the son of the... View Obituary & Service Information

The family of Michael J. Whalen created this Life Tributes page to make it easy to share your memories.

Send flowers to the Whalen family.