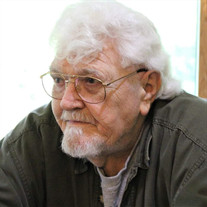 Michael A. Szuch, 76 years, of Carleton, Michigan, went home to be with the Lord on Monday, July 29, 2019 in his home. Born March 16, 1943, in Detroit, Michigan, Mike was the son of the late Rose Szuch. He moved to Carleton in 2006. In 1961, Mike married his beloved wife, the former Ronita Lee Marie Blakely, in Detroit. Sadly, she preceded him in death on November 17, 1976. Mike then met, fell in love with, and was engaged to Sharon Long. Sadly, she too preceded him in death. Mike worked as a welder for over 20 years at Adamo Demolition in Detroit. He retired in 2005. Mike was an avid horseman and enjoyed time spent with family. He especially loved playing with his grandchildren and his dog, Roscoe. Mike is survived by three loving sons; Michael C. (Evelyn) Szuch of Washington Township, Michigan, Ronald A. (Joanne) Szuch of Carleton, Michigan, and Mark J. (Latricia) Szuch of Melvindale, Michigan, two step daughters; Vera Vaughan of Carleton, Michigan and Denise Long of Taylor, Michigan, nine treasured grandchildren and 13 cherished great grandchildren. In addition to his mother, wife and fiancé, Mike was preceded in death by a step daughter; Michele Long. In keeping with Mike's wishes cremation will be held. A memorial service celebrating his life will be held on Sunday, August 4, 2019 at Ash Park in Carleton, Michigan at 1:00 PM. Memorial contributions are suggested to Henry Ford Cancer Center or Airport High School Wrestling Program.

The family of Michael A. Szuch created this Life Tributes page to make it easy to share your memories.

Send flowers to the Szuch family.