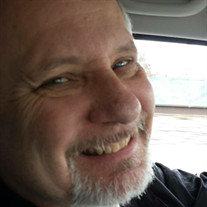 Michael L. LeTourneau, age 58 of West Olive, Michigan, formerly of Monroe, passed away at 4 p.m. Tuesday, February 9, 2021 at ProMedica Monroe Regional Hospital. Mike’s passing is due to complications since suffering an apparent heart attack while visiting family in Monroe two weeks ago. Born January 3, 1963 in Monroe, Mike was one of four children from the union of Frederick Larry LeTourneau and Janet A. Kuhlman. He graduated from Jefferson High School in 1981 and married Debbie A. (Murrell) Hughes on September 2, 1989 at Stewart Road Church of God. Mike was employed as a Heavy Equipment Operator for Lakeside Aggregate in Grand Haven, MI. During the winter months, he would operate a front end loader and do heavy snow removal for Dykstra Landscaping. Mike enjoyed playing most recreational outdoor sports, especially golf, and was an avid University of Michigan fan. For the past 28 years, he was proud to be an active member and mentor of A.A. Mike is survived by his wife Debbie; mother, Janet LeTourneau of Monroe; two children, Tim (Regina) Hughes of Fleming Island, Florida and Whitney LeTourneau of West Olive; a sister, Lori (John) Ellison of Monroe; three grandchildren, Brianna Morgan, Spencer Hughes, and Zachary Hughes. Mike was preceded in death by a son, Bradley Hughes, his father, F. Larry LeTourneau, and two brothers, Larry and James LeTourneau. Family and friends may visit from 11 a.m. until time of funeral at 2 p.m. Monday at Bacarella Funeral Home. Rev. David Kopka, Pastor of Allen Road Missionary Church in Taylor will officiate followed by burial at Roselawn Memorial Park. For anyone wanting to make a donation in Mike’s memory, the family suggests supporting any charity of the donor’s choice.

The family of Michael L. LeTourneau created this Life Tributes page to make it easy to share your memories.

Send flowers to the LeTourneau family.