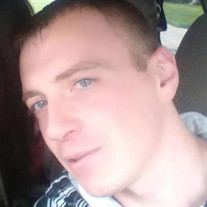 Michael Paul Cote - West, 33 years, of Brooklyn, Michigan, formerly of Monroe, Michigan, passed away Saturday, August 17, 2019 in his home in Brooklyn. Born October 6, 1985 in Monroe, Michigan, Mike was the son of Michael P. West and Sandra Cote. He was a 2003 graduate of Airport High School and went on to attend Owens Technical College (now Owens Community College) in Toledo, Ohio. Mike worked as a laborer for various manufacturing facilities in the Brooklyn area. Mike had many friends and was a real people person. He enjoyed; playing Poker, the stock market, listening to music and both playing and watching basketball. Most of all, he enjoyed time spent with family, especially his son; Mason Michael. Mike is survived by his cherished son; Mason Michael, with another child on the way, his beloved mother; Sandra Cote of Brooklyn, MI, two sisters; Krystal M. West of Newport, MI, and Cari Jo Cote of Taylor, MI, his grandmother; Judy Cote of Brooklyn, MI, a step sister; Mary, and his girlfriend Veronica Edgar of Wamplers Lake in Jackson County, MI. Sadly, Mike was preceded in death by his father, his maternal grandfather; Raymond Cote and his paternal grandparents; John and Norma West. In keeping with his wishes cremation has taken place. Memorial visitation will be held at the Bacarella Funeral Home, 1201 S. Telegraph Rd., Monroe, Michigan, 48161, on Friday, September 6. 2019 from 4:00 pm until a memorial service celebrating his life at 7:00 pm. The Rev. Roy Southerland will officiate. Memorial contributions are suggested to the family.

The family of Michael Paul Cote-West created this Life Tributes page to make it easy to share your memories.

Send flowers to the Cote-West family.